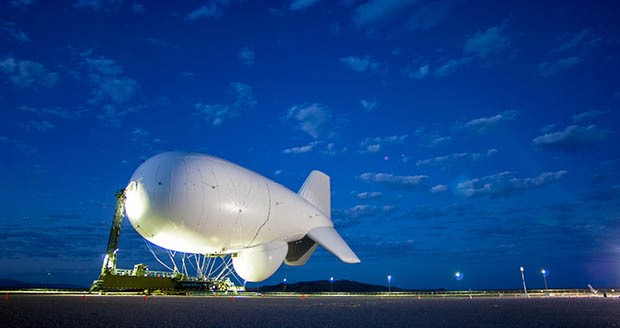 As part of the deployment, Raytheon engineers raised one of the football-field sized aerostats thousands of feet in the air and conducted a series of tests to ensure it was operating as designed.  The company will continue to test and integrate the radar for several more days, then turn the first JLENS balloon over to Soldiers of the U.S. Army’s A Battery, 3rd Air Defense Artillery.

The second aerostat is scheduled to go aloft in early 2015.  Following a series of additional tests, it will also be turned over to the Soldiers, who will conduct an operational exercise with JLENS.

During the exercise, information from JLENS will be used by NORAD, the U.S.-Canadian organization charged with aerospace warning, aerospace control and maritime warning for North America.  The 263rd Army Air and Missile Defense Command, which is responsible for defending the airspace over the National Capital Region, will also use information from JLENS.

Another JLENS system is in strategic reserve, ready to be deployed anywhere in the world at the request of combatant commanders, should they require comprehensive cruise missile defense capability.