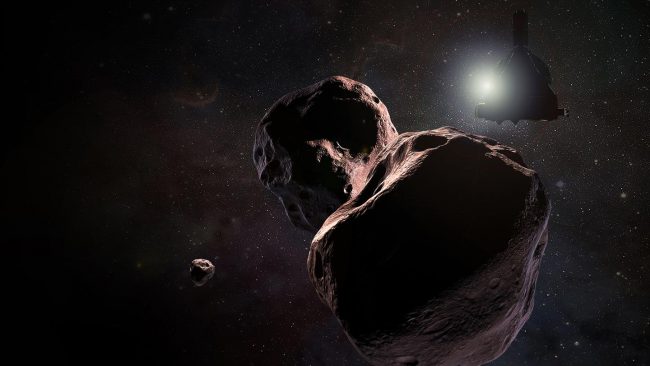 Nasa’s New Horizons Spacecraft On Target To Reach Ultima Thule – Dec 31, 2018 – Washington, D.C, USA (Techreleased) – A very special encounter is set to take place in the Kuiper Belt, six and a half billion kilometres from Earth, right at the beginning of the New Year. NASA’s New Horizons spacecraft will visit object 2014 MU69, better known as Ultima Thule. At 06:33 CET, New Horizons will fly past Ultima Thule and use its measuring equipment to examine the object from a distance of just 3500 kilometres. New Horizons was launched to space approximately 13 years ago to investigate the dwarf planet Pluto. This is the first close-up exploration of a body beyond Pluto.

First impression of the unknown object

In the run-up to the forthcoming rendezvous, planetary researchers managed to gain a ‘glimpse’ of Ultima Thule. In mid-August 2018, the Long Range Reconnaissance Imager (LORRI) spotted the relatively small object from a distance of 172 million kilometres as a tiny pinprick of light surrounded by a multitude of background stars. Although no surface structures were discernible from this distance, the position confirmed that New Horizons was on the right course to pass Ultima Thule as predicted on the morning of 1 January 2019 –

Ultima Thule – mystery at the edge of the Solar System

Ultima Thule was discovered on 26 June 2014 with the Hubble Space Telescope during a search for possible objects in the Kuiper Belt that appeared to be potential targets for NASA’s New Horizons spacecraft during the period following its flyby of the dwarf planet Pluto and its moon Charon. Ultima Thule orbits the Sun at distances of between 6.4 and almost seven billion kilometres.

The new object was initially labelled 1110113Y. In May 2015, when its orbit was determined with sufficient accuracy, it was given the official designation 2014 MU69. In March 2018, the New Horizons team selected the nickname, Ultima Thule, from the suggestions submitted.

The Kuiper Belt, sometimes also referred to as the Kuiper-Edgeworth Belt, is the cosmic home of Ultima Thule. It is a donut-shaped region of icy, sometimes extremely primitive, bodies ranging from a few kilometres to several thousand kilometres in diameter, such as the dwarf planets Pluto, Eris, Makemake and Haumea. The Kuiper Belt is immediately adjacent to Neptune and probably extends to a distance of 18 billion kilometres from the Sun. It is also the source of most short-period comets. Together, all the objects in the Kuiper Belt have only a fraction of the Earth’s mass.