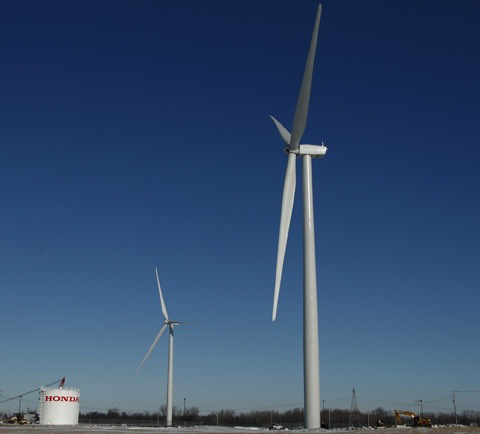 The wind turbines have exceeded the projected power output figures by 6.3 percent, and have contributed toward reducing the CO2 emissions of power production, helping Honda reach its voluntary goals to reduce the environmental impact of its products and manufacturing operations by 2020.  This includes a 30 percent reduction in CO2 emissions from Honda products, and significant CO2 reductions from the company ‘s plants and other operations, compared with year 2000 levels.

The two turbines, standing 260 feet tall with 160-foot blades, were initially projected to produce upwards of 10,000 megawatt hours (MWH) of electricity per year, accounting for approximately 10 percent of the plant ‘s annual power needs. The turbines have outperformed company projections in four of the six months since operation began. At their highest output, the turbines provided 16.26 percent of the plant ‘s power requirements for the month of April.

“We are extremely pleased with the performance of the wind turbines ‘ production over their first six months,” said Gary Hand, Vice President of Honda Transmission Mfg. of America.  “The turbines ‘ operation has exceeded the projections established during the project development.”

The installation of the turbines makes the Russells Point, Ohio plant the first major automotive facility in the United States to receive a substantial amount of its power from on-site wind turbines. The project was developed and installed by Juhl Energy (OTCQB: JUHL) from Pipestone, Minnesota. The two turbines are owned by ConEdison Solutions.

“We are pleased to observe the performance of the two on-site wind turbines are achieving results over and above what Honda had anticipated. From the outset, we were confident that the site location selected would allow the GE turbines to produce a significant amount of the facility ‘s ‘ energy requirements,” stated Tyler Juhl, Vice President of Operations for Juhl Energy.”

“ConEdison Solutions takes tremendous pride in our commitment to customers, and we are proud to be helping Honda implement its innovative energy program at Russells Point,” said Michael W. Gibson, Vice President of Energy Services at ConEdison Solutions. “With this initiative, Honda has set an excellent example for the American manufacturing sector, and we are gratified that they have been pleased with its success.”

To achieve their new environmental targets, Honda is accelerating its efforts to advance the environmental performance of its products, and its operations throughout North America.  The wind turbine project is among a number of other initiatives at Honda plants to reduce energy use and waste from manufacturing operations.

Today, Honda is targeting a 30-percent reduction in CO2 emissions from its U.S. automobile product lineup by 2020, compared to 2000 levels. In pursuit of its vision for a zero-carbon future, the company is advancing electromotive technologies in many forms, and will introduce an advanced new fuel cell car in 2015.

In keeping with its commitment to produce vehicles with the lowest CO2 emissions at plants with the smallest environmental footprint, the company is broadly addressing emissions, energy, water use and waste in all phases of its products life cycles.  In the manufacturing realm, this includes a 95 percent reduction in waste sent to landfills in North America.  Honda is working to extend its “green factory” and “green purchasing” initiatives to its more than 650 parts suppliers in North America and is also pursuing more environmentally responsible business practices among its U.S. dealers.

Honda is also demonstrating its vision for zero-carbon mobility and living with the creation of the Honda Smart Home US, in Davis, California, which was opened in early 2014 and is designed to operate with half the energy use and CO2 emissions of a typical home in that region.