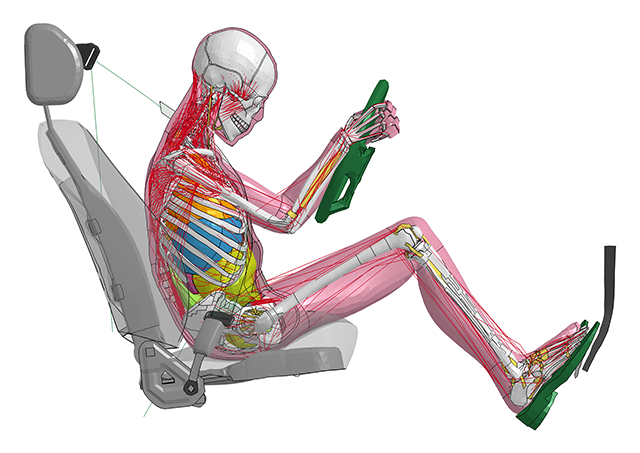 THUMS is available for purchase through the JSOL Corporation (Tokyo) and ESI Group (Tokyo). The software has been used in vehicle safety technology research by Toyota as well as automobile manufacturers, parts manufacturers, universities, research institutions, and the like, both in Japan and overseas.

THUMS Version 5 simulates changes in occupant posture by considering occupants’ pre-collision muscular states, while THUMS Version 4 accurately analyzes injuries sustained to bones and internal organs at the point of collision. Previously, injury researchers aiming to both simulate pre-collision changes in occupant posture and to analyze occupant injuries sustained at the point of collision were required to combine Versions 4 and 5 of the software.

The newly developed THUMS Version 6 allows researchers to analyze both changes in pre-collision occupant posture and injuries sustained at the point of collision with a high degree of accuracy and, since there is no longer any need to switch between different THUMS versions, will also contribute to improved work efficiency. Toyota expects that THUMS Version 6 will be used in the development of safety technologies that help protect occupants in a variety of different conditions.

Moving forward, in addition to developing preventive safety and automated driving technologies, Toyota intends to research and develop technologies that help protect occupants in the event of a collision by utilizing THUMS, and provide safety and security to its customers under a diverse range of conditions.