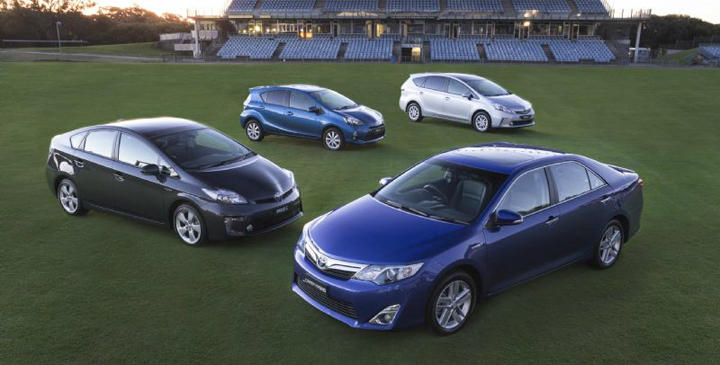 Toyota Sells 50,000 Hybrid Cars In Australia – Mar 27, 2014– Melbourne, Australia (Techreleased) – Toyota has achieved a significant hybrid milestone in Australia, selling its 50,000th car that runs on the combination of a petrol engine and an electric motor. Locally built Camry accounts for more than half the total of 50,671 Toyota-badged hybrids sold in Australia, making it the country’s best-selling hybrid vehicle by far.

Cumulative sales of Camry Hybrid have topped 25,400 since it was launched in 2010, even placing it ahead of the iconic Prius in total sales.

Australians have bought more than 18,600 Prius hybrids since the nameplate was introduced here in 2001, and it remains the world’s best-selling hybrid car.

Toyota’s hybrid technology became even more popular in Australia in 2012 with the arrival of the Prius c city car and the seven-seat Prius v.

Selling Prius alone, it took a little over seven years for Toyota’s hybrid sales to reach the 10,000 mark, but the latest 10,000 Toyota hybrid sales took less than 14 months.

Toyota Australia’s executive director sales and marketing Tony Cramb said hybrid cars accounted for more than four per cent of the company’s total sales in each of the past two years.

“The performance and fuel economy offered by Toyota’s hybrid cars explain why they have become a mainstream choice for local motorists,” Mr Cramb said.

“If Toyota’s hybrid cars were viewed as a stand-alone franchise, it would rank in the top 20 for sales – ahead of well-established brands such as Chrysler, Land Rover, Peugeot, Renault and Volvo,” he said.

“Toyota’s success with hybrid cars in Australia mirrors the global situation where sales have accelerated to well over one million a year.”

Global sales of Toyota and Lexus hybrid vehicles passed a cumulative total of six million in December last year. The latest one-million sales were achieved in the fastest time yet – just nine months.

Toyota, which has positioned hybrid as a core environmental technology, plans to continue working to raise performance, reduce costs and expand its product line-up.