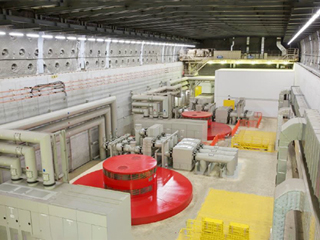 Unit 2 identical to unit 1, which started commercial operation in October last year, when compared with the conventional pumped storage power system, has a adjustable-speed pumped-storage power generation system with a wide operating range, as it can operate aligned to the demand-supply balance of a power system by raising the power output from zero to maximum output. The adaptation of this advanced technology resulted in an effective utilization of hydro resources and stable supply of power.

Toshiba’s state-of-the-art IEGT (Injection Enhanced Gate Transistor) device*1 is installed in adjustable speed secondary excitation equipment*2 and by simplifying the peripheral circuit, significant achievements of downsizing and loss reduction are accomplished. In addition, it is connected by a network of gateway*3 between monitoring and control, and this enables not only to control each unit separately, but also enables emergency operation by combining multiple unit in case a system accident due to thunderstorm by detecting power frequency fluctuation The distinguishing feature has made this technology a significant contributor in operational stability of the power system.