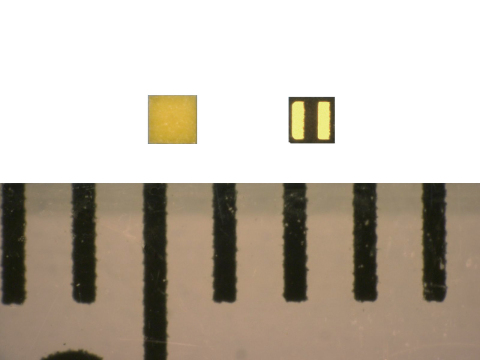 The new products utilize gallium nitride-on-silicon (GaN-on-Si) process technology and a new process technology that fabricates the elements of a packaged LED on an 8-inch silicon wafer. The LEDs are the industry’s smallest in sub-watt class (1/4-1/2W) white LEDs[2], with a package size of just 0.65 × 0.65mm, but they achieve a luminous efficacy of 130lm/W[3] and superior heat dissipation. Using the new white LEDs makes it possible to achieve a narrow beam in small-size lighting equipments and can contribute to innovation in lighting design.

The new white LEDs will be showcased at “Light + Building”, a trade fair for lighting and architecture in Frankfurt, Germany from March 30 to April 4.

Main Specifications of the New Products