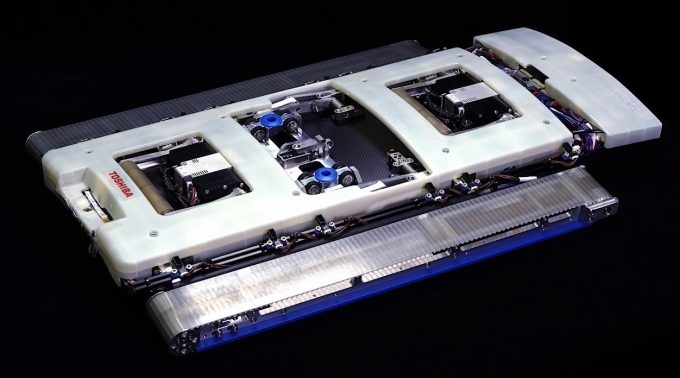 Toshiba Develops An Inspection Robot For Turbine Generators – July 10, 2018 – Kawasaki, Japan (Techreleased) – Toshiba Energy Systems & Solutions Corporation (Toshiba ESS) announced that Toshiba ESS has developed an inspection robot that can perform inspections on turbine generators in a shorter period of time. The robot can inspect generators with segregating baffles*1 which have been obstacles to the robotic inspection of generator. It can perform detailed inspections of rotor and stator without rotor removal in around 12 days*2 (including the time to disassemble and re-assemble the generator), which is almost half the time taken by conventional detailed inspections with rotor removal.

Note 1: Barrier built into the stator for internal ventilation rectification
Note 2: Since different types of generators have different numbers of inspection points, the number of days needed for the inspections may vary.

Overview of the Development

In conventional detailed inspections of generators, the rotor had to be removed from the stator once every four years, and then inspected by Toshiba certified inspectors. This process took about one month. Reducing inspection times and extending the inspection cycle are challenges faced when trying to increase the availability of generators.

Toshiba ESS has developed an inspection robot that moves on the rotor while bracing against the stator side, which makes it possible to perform robotic inspections on generators with baffles. In addition, the development of an ultrasonic inspection technology that does not use liquid contact medium enables non-destructive inspection by robot without rotor removal. This means that the same detailed inspections done by inspectors can now be performed by robot for Toshiba ESS-made thermal and nuclear power generators.