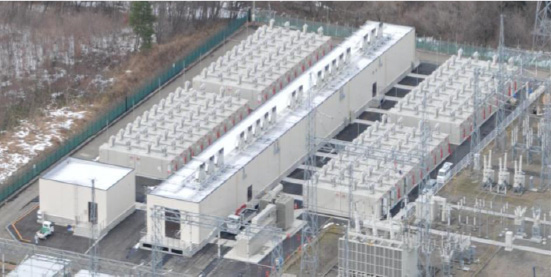 Tohoku Electric Power Company’s has deployed the BESS in a power transmission substation in Minami-Soma, on Japan’s east coast in Fukushima prefecture, as part of the “Minami-Soma Substation Project to Verify the Improvement of Supply-Demand Balance with Large-capacity Power Storage Systems″*2. The BESS will manage and improve the balance of renewable energy supply and demand, which is subject to weather-influenced output fluctuations, by storing surplus renewably electricity when supply exceeds demand and releasing stored electricity at times of high demand.

The current project is the second in which Toshiba has supplied a 40MW-class BESS to Tohoku Electric Power Company. This order follows high evaluations of the technical performance of a 40MW-20MWh delivered in 2014 for a Tohoku Electric Power Company’s Nishi-Sendai Project, in Miyagi prefecture, north of Fukushima, to regulate frequency changes caused by power output fluctuations.

Toshiba is establishing a leadership position in BESS in Japan and in the global market. The company has already supplied several BESS overseas, including a large-scale commercial system for a frequency regulation project in Ohio in the US, which started operation in 2015; to a subsidiary of Terna S.p.A., an Italian transmission company; for a collaborative on-site verification testing program with Spain’s Gas Natural Fenosa of a transportable lithium-ion BESS; and to the University of Sheffield in the UK for a 2MW energy storage system project.

Toshiba has made significant first steps in delivering BESS for ancillary services*3, and will continue to expand the business in the global market and promote adoption of large-scale systems.