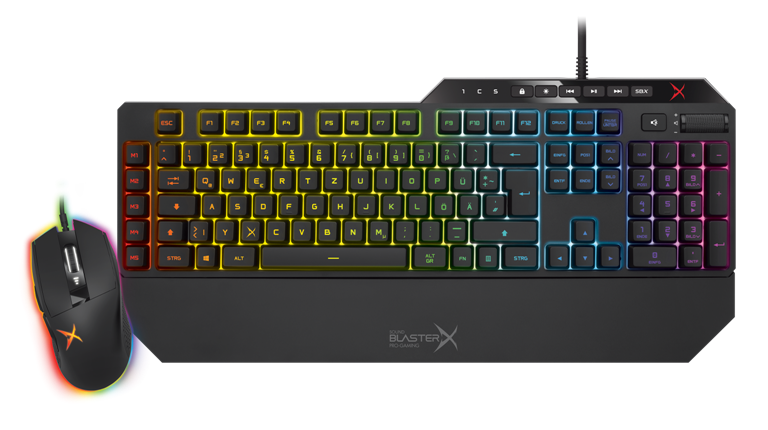 The Sound BlasterX Vanguard is designed to keep gamers at the top of their game. Crafted with ultra responsive and durable custom-made mechanical switches, the compact keyboard with 110 customizable keys, an ergonomically designed body, clean matte surface and fully programmable ambient-reactive lighting, perfectly delivers a gamers’ every command with pin point precision.

Since its launch in January, the Vanguard has garnered rave reviews worldwide:

Professionally-customized PRES (Perceive-React-Execute Switches), co-designed with OMRON, features double-cross-point contact technology for fail-safe keystrokes, and a durability that last over 70 million keystrokes. It also incorporates a centred light guide for brilliant RGB backlighting that shines through and around the keycaps

Responsive tactile switches offer a reliable and better actuation feel, but with quieter clicks for those who prefer a more silent approach to gaming

Creative will soon be releasing an Aurora SDK that allows game developers and enthusiasts to programme and synchronize lighting effects across all Aurora Reactive-enabled Sound BlasterX products.

The German and Nordic layout versions of Sound BlasterX Vanguard K08 will be available at Creative.com at EUR179.99.