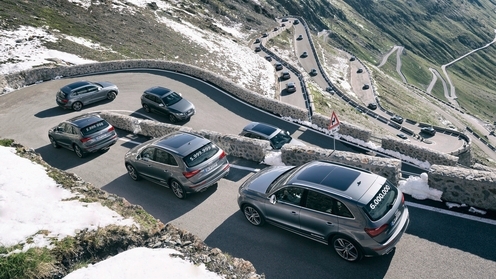 Six-millionth Audi with quattro drive technology – Jul 11, 2014– Ingolstadt, Germany (Techreleased) – The six-millionth Audi with quattro drive rolls off the production line at the Ingolstadt plant today – only about one and a half years after the five-millionth quattro. Audi will deliver the jubilee car, an Audi SQ5 3.0 TDI quattro* in monsoon gray metallic, to a family in the United States. This new production record demonstrates the global success of Audi quattro. Since the original quattro, the first Audi with permanent all-wheel drive in the year 1980, this technology has conquered the roads of the world. With approximately 170 quattro versions, the brand with the Four Rings offers the biggest selection of all-wheel drive vehicles amongst the premium manufacturers. “Dynamism and sportiness, the utmost technical precision and safety – that’s what Audi’s quattro technology stands for. More than 30 years ago, it was recognized as a pioneering accomplishment; today, it is synonymous with technical progress”, states Dr. Hubert Waltl, Board of Management Member for Production at AUDI AG. As recently as February 2013, Audi celebrated its five-millionth car with permanent all-wheel drive. After just one and a half years, the company has reached the six-million mark. “Six million times Audi quattro drive – that’s an outstanding performance! 30 years of quattro success are a credit to our motivated production team, which consistently and efficiently implements the Audi production system.”

“Our colleagues’ expertise in the field of all-wheel drive is impressive; it demonstrates our ‘Vorsprung durch Technik’ and thus makes an important contribution to the brand’s image,” says Peter Mosch, Chairman of Audi’s General Works Council. “Without our qualified and flexible team, this milestone would not have been possible in such a short time.”

With approximately 170 quattro-model versions – including the different body shapes, engines and transmissions – Audi offers the biggest selection of all-wheel drive cars amongst the premium brands. The quattro technology is available across all model series. The models Audi Q7, Audi R8, Audi A4 allroad, Audi A6 allroad and all S and RS models are only available with quattro drive.

In 1980, the Four Rings presented quattro drive for the first time at the Geneva Motor Show in the legendary original quattro. That model, which was actually planned for production in a small series, stayed in the product range until 1991. Since then, Audi has continuously developed its quattro drive system.

The international reputation of quattro was boosted not least by legendary advertising campaigns and motorsport achievements: The TV commercial in which an Audi 100 CS drives unaided up the ski jump in Kaipola, Finland, has had a cult following for almost 30 years. Walter Röhrl’s triumphal drive in 1987 is also unforgettable. The racing driver set a new course record with the Audi Sport quattro S1 in the Pikes Peak mountain race in Colorado, USA. His list of achievements on the racetrack includes four times winner of the World Rally Championship, three victories at Pikes Peak, winner in the driver and brand categories of the TransAm Championship, two DTM titles, ten times winner of the National Super Touring Car Championships and one Touring Car World Cup. After all-wheel drive was excluded from factory touring car racing in 1998, a racecar with all-wheel drive was not allowed on the circuit again until 2012. Audi’s team in Ingolstadt sent the Audi R18 e-tron quattro with hybrid technology to take part in the race and achieved a double victory, which was to be repeated in the following years, 2013 and 2014. In the FIA World Endurance Championship (WEC), Audi won both the driver title and the brand title with the hybrid sports car ion the years 2012 and 2013.

Fuel consumption of the models mentioned: