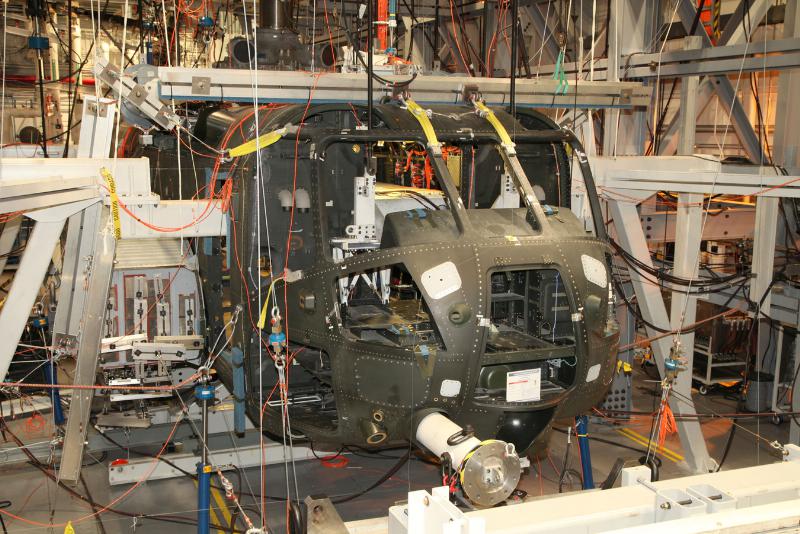 Sikorsky Tests CH-53K Helicopter for Airframe Structural Strength – Apr 10, 2014– Stratford, USA (Techreleased) – Sikorsky Aircraft Corp., a subsidiary of United Technologies Corp., has successfully completed an initial series of tests required by the Naval Air Systems Command to verify the structural strength of the CH-53K heavy lift helicopter. Conducted on a full-size non-flying airframe called the Static Test Article, the tests are part of a three-year program to validate that the largest helicopter ever designed and built by Sikorsky has the structural integrity to operate safely over its entire flight envelope — from its empty gross weight of 44,000 pounds up to its maximum gross weight of 88,000 pounds with external load. “The Static Test Article will enable Sikorsky to replicate the many stresses, strains and aerodynamic forces the CH-53K helicopter will experience during all aspects of flight, whether the aircraft is empty, filled with cargo, or carrying up to 36,000 pounds of gear suspended beneath the aircraft by an external sling,” said Mike Torok Sikorsky’s CH-53K Program Vice President. “By placing incrementally heavier static loads on various parts of the airframe assembly — including those well beyond the airframe’s analytical design strength — we can measure structural integrity, airworthiness and crash worthiness, and verify safety margins for all expected operational conditions.”

The Static Test Article is housed in a specially-built test facility at Sikorsky’s manufacturing plant in Stratford, Conn. Consisting of the cockpit, the cabin, fuel sponsons, a transition section and the tail rotor pylon, the complete airframe assembly is suspended off the ground by the shaft of its main rotor gearbox. Surrounding support beams hold the numerous hydraulic cylinders that apply the flight and inertial loads to parts of the airframe assembly. Also attached to the STA structure are component-representative weights that simulate the presence of the engines and landing gear, among other key subsystems and components.

To date, Sikorsky has completed a total of six test conditions on the Static Test Article, all conducted during 2013 and early 2014. The first four test conditions satisfy pre-flight requirements ahead of a CH-53K flight test aircraft taking to the skies for the first time later this year. Replicating the maximum load conditions encountered while in flight, the four pre-flight tests measured the structural strength of the tail rotor pylon during high and low speed flight maneuvers, the landing gear during impact with the ground, and the full airframe structure while under maximum rotor power.

Sikorsky will continue to test the structural integrity of the CH-53K Static Test Article for another two years to validate the effects of aerodynamic forces and weight distribution on different sections of the airframe.

The Static Test Article is the first of two non-flying CH-53K test articles — along with five prototype and four production-representative heavy lift helicopters — that Sikorsky is developing as part of a $3.8 billion System Development and Demonstration (SDD) contract for the U.S. Navy.

Per the current program of record, the Marine intends to order 200 CH-53K production aircraft, and to stand up eight operational squadrons and one training squadron to support the Marine Corps’ operational requirements. Eventual production quantities would be determined year-by-year over the life of the program based on funding allocations set by Congress and the U.S. Department of Defense acquisition priorities.

Sikorsky Aircraft Corp., based in Stratford, Conn., is a world leader in helicopter design, manufacture, and service. United Technologies Corp., based in Hartford, Conn., provides a broad range of high technology products and support services to the aerospace and building systems industries.

This press release contains forward-looking statements concerning opportunities for development, production and sale of helicopters.  Actual results may differ materially from those projected as a result of certain risks and uncertainties, including but not limited to changes in government procurement priorities and practices, budget plans, availability of funding and in the type and number of aircraft required; challenges in the design, development, production and support of advanced technologies; as well as other risks and uncertainties, including but not limited to those detailed from time to time in United Technologies Corporation’s Securities and Exchange Commission filings.