Oct 03, 2012–London,UK (Techreleased) –Royal marines’ Viking Armour to get extra firepower and protection in £37m overhaul. Over the next two years all 99 Vikings in the commandos’ inventory will be revamped, giving them added protection against the threat of mines, and returned to their original amphibious state – having spent several years on operations in Afghanistan.

The firepower of some Vikings will also be bolstered, fitting new guns and mortars.

The tracked vehicles, based with the Royal Marines’ Armoured Support Group at RNAS Yeovilton in Somerset, have been in service with the green berets since 2005.

They provide improved protection for crews and troops being carried over the similar BVs operated by the Corps, can be driven ashore directly from the back of an amphibious assault ship, operate in temperatures up to nearly 50˚C… or down to -46˚C in almost any terrain in the world. 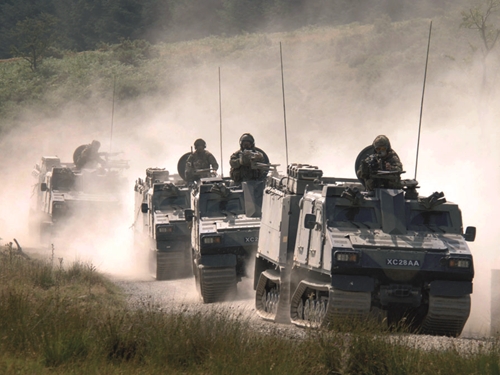 “Any modifications which enhance the operational effectiveness and makes life that bit easier for our personnel is always welcomed.”

Defence equipment minister Philip Dunne said the revamp of the Viking fleet would allow the armour to serve with the Corps into the 2030s.

The £37m deal signed with BAE Systems will see the Vikings shipped to the small town of Örnsköldsvik in eastern Sweden, where constructors Hägglunds will rebuild the vehicles one-by-one, provide the latest mine-protected v-shaped underbodies – offering greater protection should one drive over an improvised explosive device – overhaul the brakes and suspension and carry out other modifications.

Nineteen Vikings will be fitted with top-mounted guns and nine will be altered so they allow Royal Marines to fire their 81mm mortars from the vehicle.

The overhaul of the entire Viking fleet is due to be completed by the end of 2014.