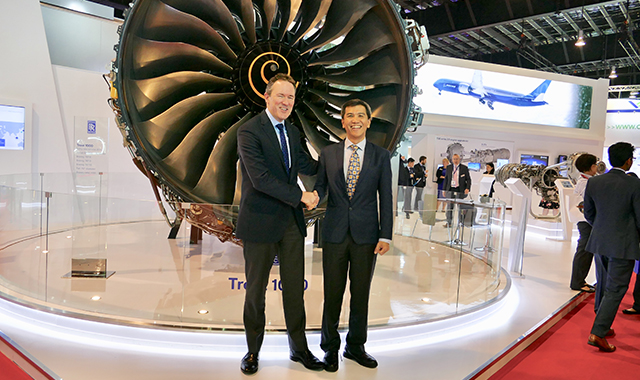 The signing comes as the airline prepares for the entry into service of its first 787-10 aircraft powered by the latest version of the Trent 1000, the Trent 1000 TEN (Thrust, Efficiency, New Technology). A full-size Trent 1000, which is on display at the Rolls-Royce stand and has been a great attraction for visitors, provided the backdrop for the signing.

SelectCare is a fixed price overhaul agreement that allows customers to benefit from Rolls-Royce’s engine health monitoring and aftermarket capability, while providing cost certainty and plan fleet servicing. It is one of a range of Rolls-Royce CareServices available through its CareStore.

Dominic Horwood, Rolls-Royce, Director Customers and Services – Civil Aerospace, said: “We are honoured by the continued confidence of Singapore Airlines in the Trent 1000 engine and congratulate them on choosing SelectCare a new, innovative, service for their Trent 700 engines.”

Singapore Airlines and Rolls-Royce have an enduring relationship. In addition to the Trent 1000, which is currently operated by its subsidiary Scoot, Singapore Airlines also operates Trent XWB, Trent 900, Trent 800 and Trent 700 engines.