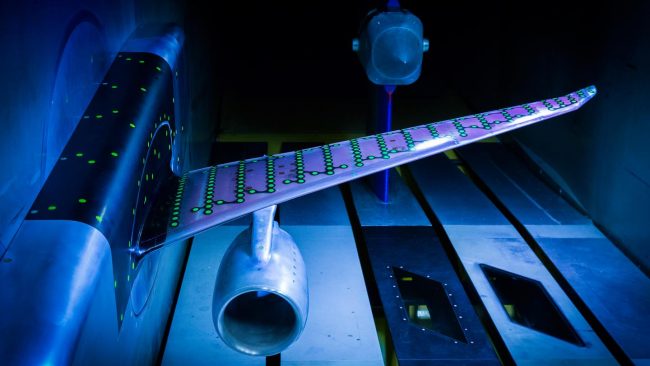 Aircraft are lightweight constructions that are not rigid but elastic. Future aircraft will be even lighter and more flexible, but this means that the occurrence of vibrations will become increasingly significant. The complex interaction between elastic vibrations has an influence on the aircraft’s flight characteristics. The best-known aeroelastic phenomenon is ‘flutter’, where the vibrations of an aircraft structure interact with the surrounding airflow in such a way that their amplitudes increase rapidly. To prevent this from occurring and to avoid critical flight conditions, flutter analyses must be performed.

A highly elastic fibreglass wing model, that is able to deform extensively, was constructed for the experiment. A large number of pressure sensors and strain gauges was installed on the wing. The wing was tested from Mach 0.7 to Mach 0.9 (corresponding to air speeds of approximately 850 to 1100 kilometres per hour) for different angles of attack. The researchers monitored the vibrations of the wing model and used a new method to analyse its eigenfrequencies and damping ratios. In the past, the large amounts of data acquired during such experiments could only be evaluated with a time lag. An efficient method developed by DLR now allows to perform the data analysis in real time. As a result, it was possible during the test to identify exactly which safety margins remained before the onset of flutter and the resulting possible destruction of the model. “This is a brand new method to analyse aircraft flutter,” said Yves Govers of the DLR Institute of Aeroelasticity. It should also allow future aircraft to be tested more efficiently and more quickly.

The Brazilian aircraft manufacturer Embraer initiated the HMAE1 project to test its numerical predictions for wing flutter and to make future flutter analysis more efficient. The DLR Institute of Aeroelasticity in Göttingen and NLR joined forces for a pre-design of a wind tunnel model tailored to the surface geometry of the wing in order to meet the requirements. Detailed design of the glassfiber wing itself and the pylon-wing connection was performed by NLR,  who also built the wing  and created the model’s built-in measurement technology.

DNW was predominantly responsible for test preparation and test execution. The actual wind tunnel test was carried out at DNW’s High-Speed Tunnel (HST) in Amsterdam, using the NLR designed and manufactured wind tunnel model, with DLR conducting the data analysis in real time.