Nov 23, 2012–Eindhoven, The Netherlands  (Techreleased) – Royal Philips Electronics has won its third prestigious award to date for the Philips by Lirio Cielo luminaire, which was chosen as the Lighting Product category winner at the 2012 FX International Interior Design Awards. The pendant light uses the latest LED technology to create a show-stopping twist on a classic design. By cleverly integrating the light source into the shade itself, its designers have left the lamp completely hollow inside.

The judges were struck by how the Lirio Cielo displayed “a neat combination of convention and new technology.” The luminaire, which has also won iF and red dot awards for outstanding product design, scored highly with all three judges in the category. 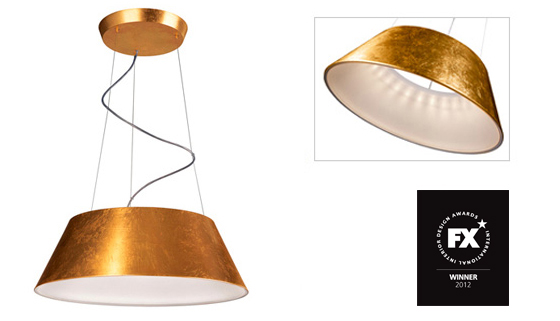 “It is a groundbreaking design, and one of the first that truly explores the new possibilities of LED lighting,” explains Rogier van der Heide, Vice President of Philips Design and Chief Design Officer at Philips Lighting. “Rather than replacing light bulbs in existing lampshades by LED, our Lirio Cielo shows how LED unleashes the creative freedom of designers. This is a luminaire with no visible light source; a new paradigm that will inspire many creatives to use LED in new and unexpected ways.”

Three other projects were shortlisted in the Lighting Product category of the awards, which have grown over the years to include outdoor projects as well as interior designs. The clean, graphical lines and soft, diffuse light of the Lirio by Philips Balanza table and floor lamps caught the judges’ attention, as did the Philips LivingColors Bloom, one of the newest additions to the redesigned LivingColors family of LED luminaries. Meanwhile, the innovative LED street lighting system Philips FreeStreet struck a chord thanks to its elegant, slim-line design which helps to clear some of the visual clutter from busy outdoor city spaces.