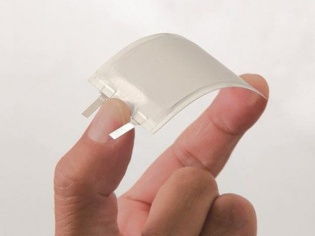 Panasonic Develops Bendable, Twistable, Flexible Lithium-Ion Battery – Sep 29, 2016– Osaka, Japan (Techreleased) – Panasonic Corporation announced today that it has developed a Flexible Lithium-ion Battery with a thickness of only 0.55mm, or about 0.022 inches. Suitable for use in card-type and wearable devices, this rechargeable battery can retain its characteristics even after repeatedly bent into a radius of 25mm or twisted to an angle of 25 degrees. Card devices, which are often carried in wallets or pockets, require internal components that can withstand bending and twisting. Slim lithium-ion batteries are used in such devices, but these batteries can degrade when they are bent or twisted, resulting in shorter operating time for the devices.

Panasonic’s new flexible battery can withstand bending and twisting beyond the Japanese Industrial Standards for identification cards*1. When used in card devices such as smart cards and card keys that work on batteries, as well as body worn devices and smart clothing, this battery can retain its characteristics even if the device is frequently bent or twisted.

This new flexible battery will be on display at CEATEC JAPAN 2016 from October 4 to 7 at Makuhari Messe.

Sample shipments are scheduled to start by the end of October 2016. Product development will continue towards mass production, with an eye to an even slimmer form factor ideal for various IoT devices such as card devices and wearable devices.

1. A flexible battery that can maintain its characteristic even with repeated bending and twisting.

Panasonic has developed a Flexible Lithium-ion Battery with a thickness of 0.55mm that uses the company’s unique stacked electrode construction that has resistance to bending and twisting. The battery has demonstrated that it retains its characteristics during bending and twisting tests with severer conditions required by card application standards. This battery can maintain more than 99%*2 of its initial capacity after 1,000 bends with a radius of 25mm, or after twisted 1,000 times with an angle ±25°/100mm, thanks to a newly developed laminated outer layer and newly developed internal structure. This battery can meet various market needs for applications entailing repeated bending and twisting such as card devices and smart clothing.

2. Contributing to longer life of devices by retaining charging and discharging characteristics even with repeated bending and twisting.

3. The new battery can be used reliably for devices attached to the human body because of excellent safety.

This battery uses newly-developed laminated outer body and internal structure that make it difficult to cause leakage and abnormal heating during repeated bending and twisting. That makes this battery reliable and safe for use in wearable and body attached devices.