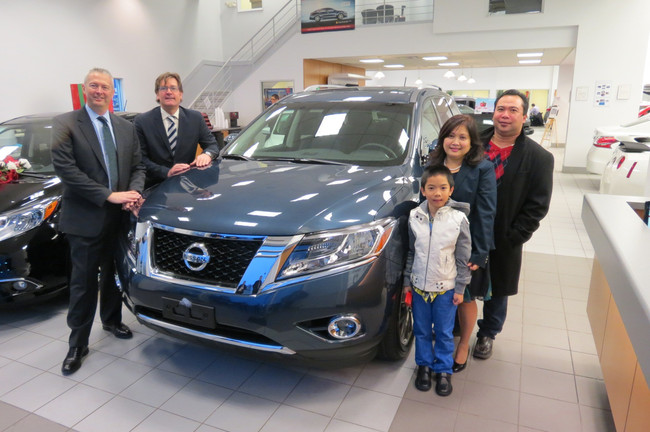 Nissan surpasses sales of 100,000 vehicles for first time in Canada – Dec 18, 2014– Mississauga, Canada (Techreleased) – Nissan today announced that for the first time in Canada, the brand has achieved sales of 100,000 units within a calendar year, breaking the previous record of 82,604 in 2013. The milestone was reached yesterday when a 2015 Nissan Pathfinder Platinum was sold to Mr. Rikki Solitario at Willowdale Nissan in Thornhill, Ontario. “This is a wonderful achievement to share with our employees and dealer network during the holiday season and is the direct result of hard work, partnership with our dealers and planning to bring the right cars to Canadians,” says Christian Meunier, president of Nissan Canada Inc. “This was a particularly exciting year for the Canadian team with the launch of the Nissan Rogue and Micra, both very successful in Canada.

For Micra, it was the first time in many years we brought a new vehicle to Canada which wasn’t offered in the United States. It was an important addition to our line-up, growing our share of the entry-level segment it competes in with Versa Note, but appeals to different customers.”

Since Micra arrived in dealerships in April 2014 with the lowest starting MSRP in Canada of $9,998, sales have exceeded 7,000 units, while sales of Versa Note have continued to increase with over 12,000 units sold CYTD. Together, Nissan’s share of the entry-level segment is 22 percent at the end of November. The excitement around Micra will continue next year with the launch of the 2015 Nissan Micra Cup – Canada’s most affordable racing series featuring Canada’s most affordable car.

The Nissan Rogue continues to be a hot seller in the compact crossover segment and is the top seller in the line-up with 26,729 units sold up to the end of November, up 78 percent year-over-year. Rogue hits the mark with great design, high utility, an ample interior and the right level of equipment while being easy-to-maneuver in the city, fuel efficient and affordable. Added to that is the availability of the Nissan intuitive all-wheel drive system, and it is clear why the car is so popular.

Nissan continues to dominate the all-electric segment with the Nissan LEAF, which has surpassed sales of 1,020 units for 2014, an increase of over 130 percent for the same period last year.

“This exciting milestone is just the beginning, and we expect to continue this sales momentum into the New Year with the new Murano in dealerships now, as well as the much anticipated redesign of the all-new Nissan Titan full-size pick-up truck,” added Meunier. “The Nissan Maxima sport sedan has a long legacy here in Canada and we are excited to prepare the launch of an all-new model, so stay tuned!”