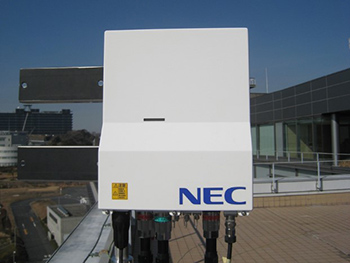 In the low super high frequency (SHF,) band massive-element AAS base station system developed by NEC, the CU exchanges information on terminals connected to different DUs between multiple DUs. DUs then form directional signals (beams) while performing coordination control between DUs. This greatly improves the throughput of terminals located near the boundary of DUs’ communication ranges (cells) when compared to conventional throughput and achieves stable, high-quality communication regardless of location.

Currently, when adjacent terminals are located near the communication range boundary of several DUs and each DU forms a beam independently for each terminal communicating with the DU, the quality of communication decreases, including reduced video download speeds due to radio wave interference between the DUs. For 5G, where cells are arranged more densely, it is believed that interference between DUs will become a major challenge.

In these verification experiments, under a range of conditions, such as suburbs and city centers, the quality of downstreaming is being measured by the presence or absence of coordination control between DUs in a state where multiple adjacent terminals are located near the communication range boundaries of two DUs that are connected to the CU and are in communication with each DU.

In one set of verification experiments, coordination control is not being performed; this has resulted in significant interference and a decrease in the quality of communications. This is because beams were formed and downstreaming was performed without considering the influence of terminals controlled by other DU.

However, in other experiments, when coordination control is performed, beams are formed through coordination between DUs. This prevents a decrease in the quality of communication caused by radio wave interference between DUs and improves the downlink throughput by as much as 50%. Moreover, it has been confirmed that stable and high-quality communications can be available regardless of location.

“NEC is committed to contributing to the successful roll-out of 5G in the near future, including these verification trials using the massive-element AAS base station system,” said Kenichi Ito, Deputy General Manager, Wireless Network Development Division, NEC Corporation. “Moving forward, we aim to continue driving the advancement of high-speed, large capacity communications and sophisticated service functions that contribute to services provided by telecommunications carriers.”

NEC will display this system and introduce 5G initiatives in Hall 3, Stand 3M30 at Mobile World Congress 2018 in Barcelona, Spain, from Monday, February 26 to Thursday, March 1.