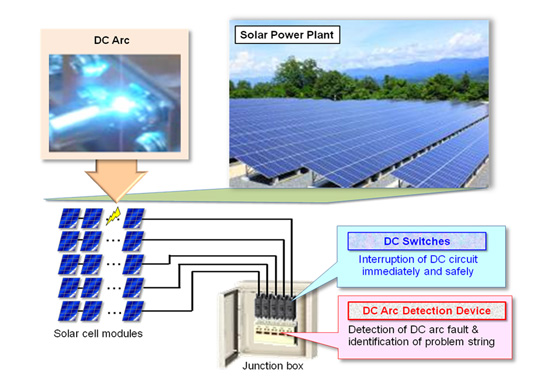 The new technology detects the DC arc fault as well as identifies the faulty circuit by monitoring sources of high-frequency current and possible deviations from normal current and voltage characteristics in solar cells.

The quick detection of the DC arc fault prevents the spread of failure to circuits that are functioning normally. Continuous operation of healthy circuits and faster restoration of faulty circuits results in minimized decreases in electric power generation by individual solar cells and therefore the solar power plant overall.

Mitsubishi Electric also announced today its new “ARC SWEEPER® ” technology. DC, unlike alternating current (AC), presents two difficulties when attempting to shut off the current to switches. Firstly, the current direction is determined by magnetic polarity because current is interrupted by magnetic action. Secondly, larger magnets and broader breaking area are necessary due to higher voltage used in circuits. ARC SWEEPER improves the breaking capability by enhancing the magnetic blowout effect, so DC current can be separated accurately and quickly regardless of current direction.

Following the occurrence of various fires at solar plants in North America due to DC arcs caused by malfunctioning circuit connections, the use of devices to detect DC arc has become increasingly mandatory according to UL standards in the United States. Also, the International Electrotechnical Commission (IEC) is working to standardize DC arc countermeasures.

Conventional detectors require up to two seconds to detect a DC arc. As a result, all circuits, including healthy circuits, must be shut down, leading to drastic decreases in power generation and long intervals before the faulty circuit can be restored.