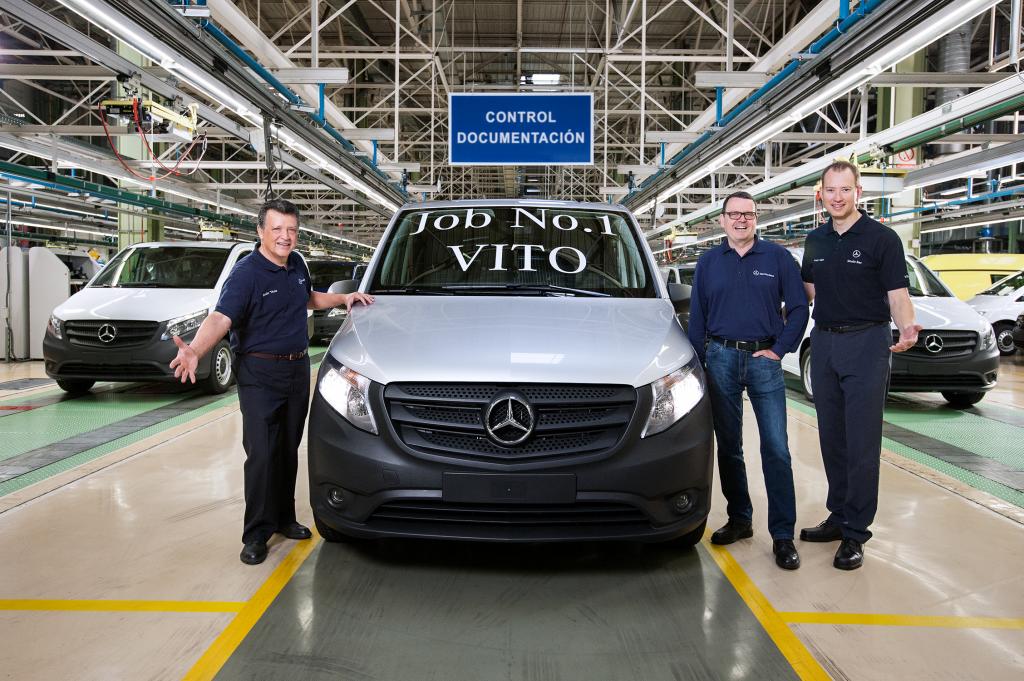 Mercedes-Benz Vans – Production launch of the new Vito – Aug 18, 2014– Stuttgart, Germany (Techreleased) – The first unit of the new Vito rolled off the production line today at the Mercedes-Benz plant in Vitoria, Spain. The vehicle from Mercedes-Benz Vans sets new standards in the mid-size van segment. The new van with a permissible gross vehicle weight of 2.5 t to 3.2 t impresses with very low fuel consumption (as little as 5.7 l of diesel per 100 km) and a low purchase price (starting at €17,990 plus tax in Germany). The new Vito is also the first mid-size van to feature three drive system variants: front-wheel drive, rear-wheel drive, and all-wheel drive. As a Mercedes-Benz vehicle, the new Vito also sets safety standards with its many innovative safety and assistance systems. Frank Klein, Head of Production, Mercedes-Benz Vans, had the following to say at the vehicle’s production launch in the Vitoria plant: “Our new Mercedes-Benz Vito is setting the bar higher for mid-size vans. The new Vito is the benchmark in its segment for safety, efficiency, and quality. We are now attacking in our traditional markets with new entry-level variants. Moreover, we are conquering new markets and also putting the new Vito on the road in the Americas. The Vito is our second global vehicle after the Sprinter, and the van is being launched here in Vitoria today.”

Almost 1.2 million Vitos were sold between the vehicle’s market launch in 1995 and the end of 2013. Around 3,500 employees manufacture the new Vito at the plant in Vitoria, Spain. Mercedes-Benz Vans invested €190 million in the plant in Spain’s Basque region to prepare it for the model changeover. The money was mainly spent on the modernization and reorganization of the plant’s body shop, paint shop, and assembly area. Examples of these investments in production include a new coordinate measuring machine, which measures bodies-in-white extremely precisely to within one millimeter; a new optical measuring device for checking body components; a new waxing facility; adapted assembly lines; numerous automation processes; more efficient laser systems; and new robots. In addition, the division invested more than €8 million in Vitoria to provide the employees with around 300,000 hours of training to prepare them for the new model series.

“Our team does top-notch work, and we are very proud that we build the new Vito in Vitoria in top quality,” says Emilio Titos, Head of the Vitoria assembly plant. “As a result, Vitoria continues to be the competence center for mid-size vans within our global production network. Together with all of the other participants, we are now looking forward to the new Vito’s success story.”

This year the plant, which is located in the heart of the Basque region in northwestern Spain, is celebrating its 60th anniversary as an automobile production location. The first vehicle rolled off the assembly line here in 1954, when the plant still belonged to the Auto Union company. The former Daimler-Benz AG completely acquired the plant in 1981. Today the plant site covers a total area of 600,000 m². It has a production space of around 370,000 m² and manufactures about 80,000 vans annually for export to customers all over the world. The Vitoria plant is the second-largest Daimler van production plant in the world. In addition, it indirectly generates about 13,000 jobs in the region.

The crucial issue for commercial van customers is the vehicle’s total cost of ownership. That’s why the developers at Mercedes-Benz Vans made the new Vito extremely fuel efficient. Average NEDC diesel consumption has been reduced by around 20 percent compared to the predecessor model. The Vito with BlueEfficiency package is especially fuel efficient. The package can be ordered with the new rear-wheel drive Vito, and is standard equipment in all Vito Tourer models that have an automatic transmission, are registered as passenger cars, or are variants equipped with the model series’ most powerful engine. The Vito 116 CDI with BlueEfficiency package and truck registration has a certified fuel consumption of 5.7 l/100 km — a value that is unmatched in this vehicle category. All the different new Vito engine variants also benefit from a long maintenance interval of up to 40,000 km or two years.

High level of safety: The Vito is the benchmark in its segment

The new Vito also sets new standards for safety. Already the Vito panel is the only van equipped with airbags and a seatbelt warning system for both the driver and front passenger. Boasting up to eight airbags for the driver and passengers, the new Vito Tourer is now the new benchmark in this regard. Standard equipment in the new Vito also includes a tire pressure monitoring system and the Attention Assist system. In a unique development in the mid-size van segment, the Crosswind Assist system is included as basic standard equipment in the new Vito model series. Crosswind Assist is able to compensate nearly fully for strong wind gusts. The new Vito can be further customized with additional assistance systems that are available as options. New and unique in the van segment as a whole are the Active Parking Assist and Collision Prevention Assist systems. Also available is Blind Spot Assist, which warns drivers of approaching vehicles when they switch lanes, and Lane Keeping Assist, which prevents drivers from inadvertently leaving the lane.

The new Vito comes with halogen headlights as standard, but it can also be ordered with the optional LED Intelligent Light System (ILS). Previously, such a system was not available in the van segment. The ILS consists of LED turn signal indicators and LED daytime running lights, as well as of LED low-beam, high-beam, and cornering lights. These headlights can adjust the manner in which they distribute their beams in line with the speed of the vehicle and requirements on the road or highway.

The only van in its segment with three different powertrains

The variety of diesel engines available in the new Vito is also unique in the model’s segment. The front-wheel drive variants are equipped with a compact, transverse-mounted four-cylinder engine with 1.6 l displacement. This engine is available in two output ratings: 65 kW (88 hp) and 84 kW (114 hp).
Vito models with rear or all-wheel drive systems are equipped with a four-cylinder engine with 2.15 l displacement. This engine is available in three output ratings: 100 kW (136 hp), 120 kW (163 hp), and 140 kW (190 hp). The Vito 119 BlueTEC is particularly important because it is the first van in its segment with a Euro 6 engine.
The new Vito is scheduled to be launched in Germany in October 2014. The model will subsequently be introduced in other European countries. Prices for the Vito 109 CDI panel van will start at €17,990 in Germany (excluding value-added tax). The new Vito is thus a van that can do more – but doesn’t cost more.