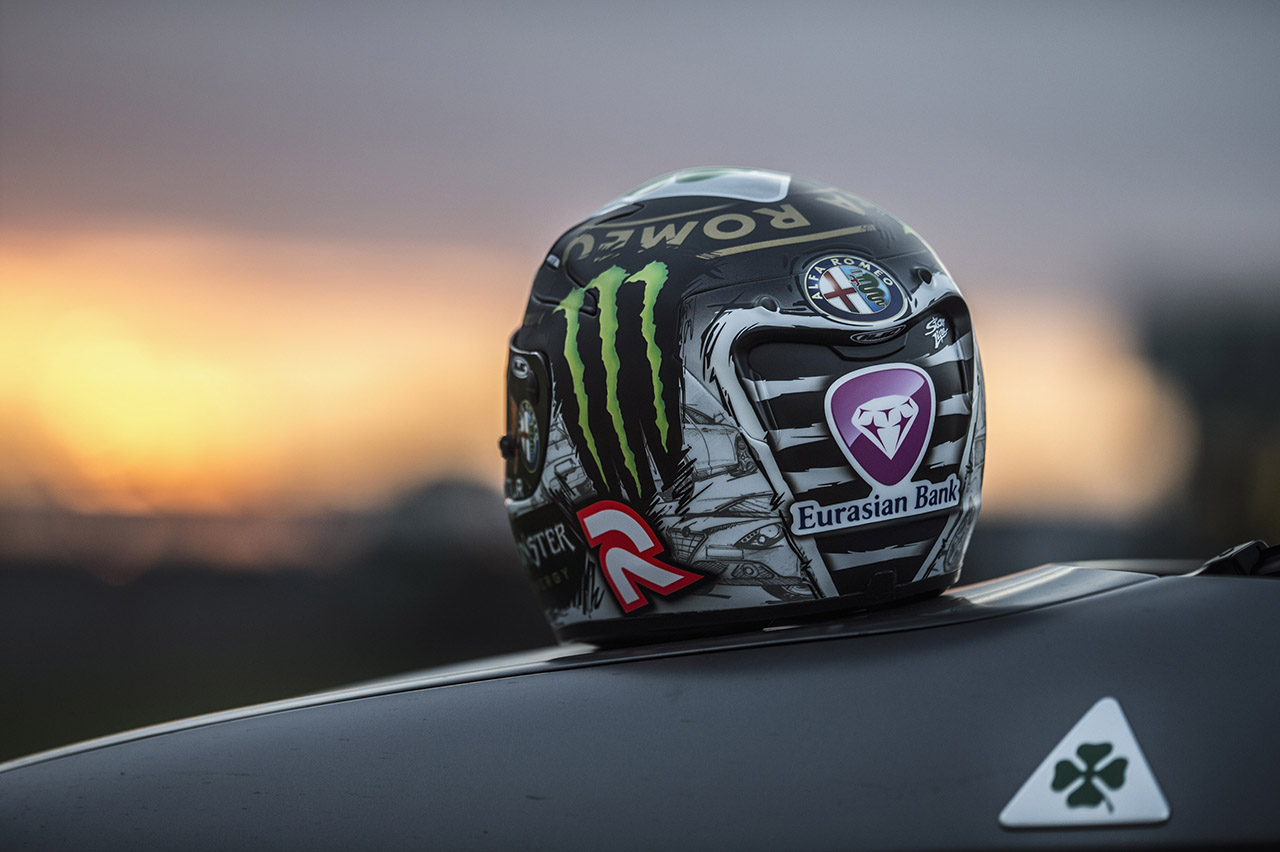 Jorge Lorenzo’s second special helmet – Sep 02, 2014– Turin, Italy (Techreleased) – The new helmet that many times champion Jorge Lorenzo – official fan of Alfa Romeo for the whole of 2014 – will be wearing for the qualifiers and race at the “Hertz British Grand Prix”, the twelfth stage of the MotoGP 2014 season on the legendary Silverstone track in the United Kingdom, was presented today. This is the second special helmet (the first was made for the Italian Grand Prix in Mugello) that the Spanish rider wanted to customise with the legendary ‘Quadrifoglio Verde’ logo, the four-leaf clover emblem that has identified the best Alfa Romeo cars for competitions and selected special production versions since 1923.

In the saddle of his official Yamaha YZR-M1, many times champion Jorge Lorenzo – the only Spaniard to have won two world championship titles in the top class of motorcycle racing – is tackling the 2014 MotoGP World Championship with the Alfa Romeo logo featured prominently on his racing suit and helmet, sealing an important agreement between one of the most well-known and appreciated racers at an international level and the Alfa Romeo brand, which superbly expresses Italian style and motoring experience together with a unique, winning spirit made of challenges and competitive drive.

The special helmet for Silverstone required 45 hours of work to reproduce the unique graphics created personally by Jorge Lorenzo and followed through all its production stages. In detail, the shell was first dulled with special sandpaper, then the graphics and paint were applied using pre-cut vinyl masks and, finally, it was customised with dedicated adhesives. The result is a unique, captivating item which pays homage to one of the most famous symbols in the motoring world: Alfa Romeo’s ‘Quadrifoglio Verde’. More in detail, the helmet will sport a large bright green four-leaf clover positioned on the top and the trademark triangle and ‘Alfa Romeo’ logo on the back.

For one of the world’s most prestigious race tracks – and one of the fastest of the MotoGP season – the official rider of the Movistar Yamaha MotoGP team has chosen the lucky charm that debuted on the Alfa Romeo ‘RL’ that Ugo Sivocci drove to victory in the XIV Targa Florio in 1923. Since then, all Alfa Romeo’s racing cars have been distinguished by this emblem known throughout the world, the same which characterised selected standard production Alfa Romeos since the 1960s onwards.

The glorious tradition continues to this day with the new high-performance ‘Quadrifoglio Verde’ versions of the Giulietta and MiTo with their essential style, compact and powerful engines, perfect weight-to-power ratio and typical Alfa Romeo technical content dedicated to driving pleasure. In brief, the MiTo and Giulietta sporting the legendary symbol   are taking their place in the best Alfa Romeo tradition, drawing on the heritage of dynamic performance, without compromising on efficiency, respect for the environment and convenience in everyday use.

The new Giulietta Quadrifoglio Verde – the purest expression of the Alfa Romeo DNA – stands out for its bold look and strong personality. In addition, it features an exclusive engine inherited from the Alfa Romeo 4C super car: the new 240 HP direct injection 1750 Turbo Petrol with aluminium engine block combined with the innovative Alfa TCT 6-speed twin dry clutch transmission. Equipped with the enhanced DNA selector and the Launch Control function (the only in its segment to offer this function), the Giulietta Quadrifoglio Verde accelerates from 0 to 100 km/h in just 6 seconds.

The MiTo Quadrifoglio Verde – the most dynamic of all compact sports cars – is equipped with the new 170 HP 1.4 MultiAir Turbopetrol and the innovative Alfa TCT. The jewel in the crown of this engine version is its exceptional weight-to-power ratio (6.7 kg/HP), which has always been one of the key factors behind Alfa Romeo’s success – in addition to a segment-leading specific power (124 HP/litre).