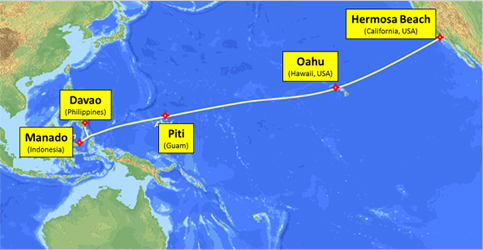 “The SEA-US project is connected seamlessly with Telkom’s Domestic Backbone, and the cable will provide unmatched latency from Indonesia to the United States,” said Syarif Syarial Ahmad, President Director of Telin. “The project will also support Indonesia’s strong economic growth and its government’s Master Plan for Acceleration and Expansion of Indonesia’s Economic Development (MP3EI). We began pursuing SEA-US in 2013 and are very proud to be a part of this historic project that marks the first gateway from the east part of Indonesia to the world.”

In addition, Gil Genio, Chief Operating Officer for International and Business Markets of Globe Telecom stated, “Our country has become the preferred destination for the outsourcing and offshoring industry, including major call centers, business process outsourcing providers, global financial institutions and a host of other multinationals that require very large bandwidth.  We have also seen the explosion of the mobile Internet, enabling a new lifestyle for our mobile customers and businesses.  The SEA-US project will enable Globe to meet tomorrow’s bandwidth needs, and is part of our effort to provide a great customer experience on their mobile and other devices, as well as add even more diverse options for companies to connect to the US.”

Russ Matulich, Chief Executive Officer of RTI continued, “The SEA-US Cable will provide much needed Asia-US connectivity and will be the fastest cable connecting Southeast Asia with the United States. It provides essential route diversity from the North Pacific and taps into the strong economic growth of more than 1.5 billion businesses and consumers who are internet savvy and data hungry.”

“Guam is a strategic location in the Pacific which allows GTA to successfully connect the Asia Pacific region to the United States. GTA’s expansive and redundant network enables secure interconnectivity to other cables, increasing Guam’s importance to future cable builds,” said Robert Haulbrook, CEO and President of GTA.

Eric Yeaman, President and Chief Executive Officer of Hawaiian Telcom said that, “Hawaiian Telcom’s participation in the SEA-US project strengthens Hawaii’s role as a key strategic hub for traffic diversity and redundancy between the US and Asia.  Additionally, investing in the SEA-US system will allow Hawaiian Telcom to efficiently meet its internal long-term Trans-Pacific capacity needs, as our customers increasing demand for bandwidth continues to grow.”

When completed in the fourth quarter of 2016 at an approximate cost of US $250 million, the cable system will provide an additional 20Tb/s capacity, connecting Indonesia and the Philippines to the United States with state-of-the-art 100G technology. This capacity will cater to the exponential growth of bandwidth demand between both continents.

“Backed by more than 40 years of experience in constructing over 200,000 kilometers of submarine cable infrastructure, NEC is one of the world’s top vendors of submarine cable systems,” said Mr. Naoki Yoshida, General Manager at NEC’s Submarine Network Division. “The construction of this advanced system enables NEC to capitalize on its experience and contribute to worldwide communications by expanding connectivity and capacity to this increasingly important Trans-Pacific route.”