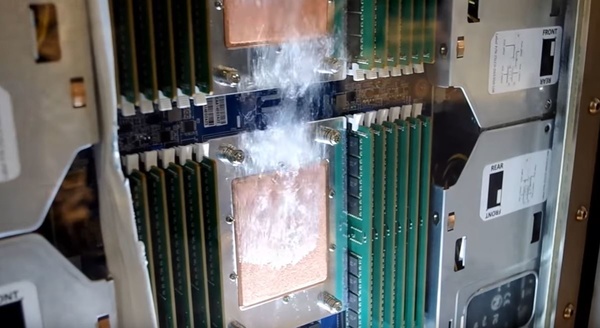 Showcased at GIGABYTE’s SC18 booth will be an unreleased product that we can reveal here first: G591-HS0, a 5U Xeon Scalable processor system that can accommodate up to 40 x single slot GPU (PCIe x16) cards such as NVIDIA’s P4 or T4, creating an ultra-powerful inferencing engine for your data center that can unlock a new wave of AI services such as speech recognition, image and video processing or recommender systems used in online shopping & video streaming.

Attendees will also be given a preview to some other exciting new products pending release, including R161-R12, an overclocked liquid cooled Intel® Core™ X Series Processor server for high-frequency trading, and two new Density Optimized ARM servers – H261-T61, a 2U 4 Node server with dual ThunderX2 processors per each node, and H221-Q20, a 2U 2 Node server featuring Qualcomm Centric 2400 processors, a platform which will be brought to the market exclusively by GIGABYTE.

Speaking of liquid cooling, GIGABYTE will be again collaborating with our infrastructure partner Allied Control to build several live demonstrations of two-phase liquid immersion cooling systems. Immersion cooling can be up to 4000x more efficient at removing heat than air, and a two-phase system utilizes passive cooling using the natural process of evaporation – eliminating the need for additional cooling hardware such as pumps or jets, resulting in even greater energy savings. GIGABYTE has co-operated with Allied Control to create a standard POC (Proof of Concept) unit that is suitable for GIGABTYE’s GPU servers, and will be displayed during the show with a 2U GPU server that has been fitted with a record-breaking 16 double-slot GPU cards.

GIGABYTE will also feature a range of our newly released systems aimed at HPC applications including three brand new AMD EPYC servers (two new GPU servers: G291-Z20 and G221-Z30, and H261-Z61, our new Density Optimized 2U 4 Node server), our highly popular 4U 8 x SXM2 GPU G481-S80 (labelled by Serve The Home as a “DGX 1.5” system in their review), as well as some of GIGABTYE’s new OCP compute and GPU server nodes (RACKLUTION-OP) installed in a 12OU OCP mini-rack.

GIGABYTE will even show off a newly developed passive cooled AMD Radeon™ RX Vega⁶⁴ GPU card, which is ideal to be installed in our GPU server systems to power your HPC or AI workloads.

GIGABYTE is looking forward to welcoming SC18 attendees to our booth during the show, or those who can’t attend can still follow our YouTube channel for interviews and product videos which will be uploaded during the show.