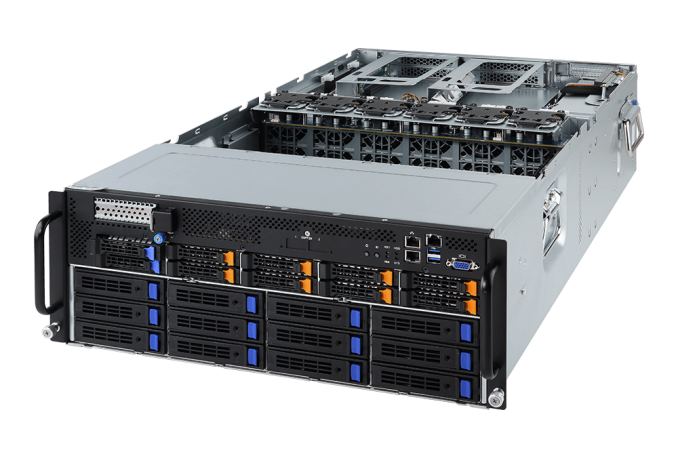 GIGABYTE Releases Seven New GPU Servers To Power Your Next AI Breakthrough – Nov 19, 2019 – Taipei Taiwan (Techreleased) – For the past few years GIGABYTE has established an enviable reputation as an industry leader in high performance accelerated computing platforms, by continuously building new systems based that feature the highest GPU density available in the market, combined with excellent cooling performance, power efficiency and expansion flexibility.

GIGABYTE is now pleased to welcome another seven new products to join our G-Series GPU server family, and continue setting the pace in the industry as a leader in GPU computing platforms:

GIGABYTE is proud add five more systems to our 2nd Generation AMD EPYC™ powered server lineup, bringing to a total of 28 systems that GIGABYTE has released so far this year since the release of 2nd Gen EPYC in August – including rack servers, edge servers, GPU servers and high density 2U 4 node servers – and firmly establishing GIGABYTE’s position as the system vendor with the most complete and diverse 2nd Gen EPYC system lineups on the market.

The G291 Series has been one of GIGABYTE’s most popular GPU server platforms, with an ingenious design that allows for a maximum density of 8 GPGPU cards in a 2U chassis. The chassis design features four huge GPU bays, with two on each side of the server.

Our G292 series continues with this excellent design for the 2nd Gen EPYC processors. The new systems are available both in single socket (G292-Z22) and dual socket (G292-Z42) models for different workload requirements, and supports up to eight PCIe® Gen 3.0 GPU cards such as NVIDIA Tesla V100. Two additional models, G292-Z20 and G292-Z40 which offer native support for PCIe® Gen 4.0 GPU cards will be released early in 2020.

GIGABYTE’s G482 Series is a 4U dual socket server platform that not only features dense GPU capacity but also impressive onboard storage space, allowing the user to build an integrated storage cluster within the same unit to store data sets for deep learning workloads etc.

The G482-Z50 can support ten PCIe Gen 3.0 GPGPU cards in balanced mode, with each five GPU cards connected to one CPU downstream via a PCIe switch to minimize GPU to GPU communication latency. The G482-Z50 also features 12 x 3.5” SATA / SAS drive bays and 10 x 2.5” NVMe / SATA / SAS SSD drive bays for ample storage capacity, and can be used to build an “AI machine in a box” that offers powerful compute, GPU compute, storage and networking capabilities.

All GIGABYTE servers include GIGABYTE Management Console as standard, which is based on an AMI MegaRAC SP-X web-browser based platform and is compliant with the latest standards of Redfish API. GIGABYTE Management Console is also notable in providing HTML5-based iKVM remote management client as a standard feature, with no additional add-on license required to purchase. Also available as a free download is GIGABYTE Server Management (GSM), GIGABYTE’s multiple server remote management software platform, and includes both a desktop and mobile APP.