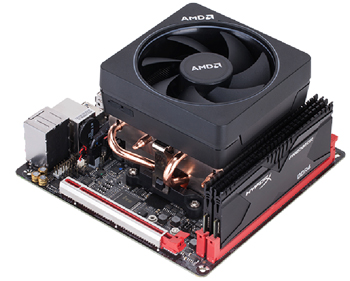 “GIGABYTE has been building strong relationships with AMD. When AMD published the latest Wraith Max, we released a corresponding model to meet the demand” said Henry Kao, the Vice President of GIGABYTE Motherboard Business Unit. “Even more so, GIGABYTE’s R&D put great efforts on re-arranging the components on the board in order to make mini motherboards achieve optimal compatibility for larger thermal cooling solutions. In the future, we will continue to cooperate with AMD and create more unique, creative products to address the demands from gamers and enthusiasts.”

Unlike most conventional CPU coolers, AMD’s newly released Wraith Max has larger dimensions and weight, making the traditional Mini-ITX designs more challenging. Due to the limited space, GIGABYTE redesigned AB350N-Gaming WIFI motherboards to enlarge the zones between the CPU socket and DIMM Slots so that AB350N-Gaming WIFI can support larger CPU coolers and other components, and improve the air circulation at the same time. End-users can install memory modules with larger coolers without any interference.

GIGABYTE decided to carry on with our popular RGB Fusion feature. Users will have access to different preset lighting configurations, including a choice of colors for LEDs and RGBW/UV. Also, users can set the LEDs to synchronize with Wraith Max coolers or have them change colors to indicate the CPU temperature.