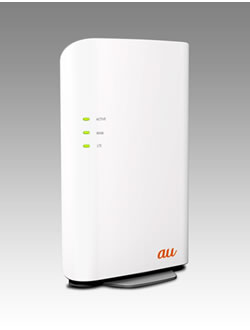 As the first femtocell access point in Japan able to support VoLTE service in interior environments, this product has now been adopted by KDDI.

In addition to the BroadOne LS100 Series, Fujitsu now provides a femtocell gateway that consolidates and efficiently operates tens of thousands of LTE femtocell access point, an element management system that monitors and controls networks, and comprehensive systems services that integrate and ensure the stable operations of these components. Fujitsu also assisted with building a VoLTE-compatible femtocell access point system.

Overview of the Deployment

Key aspects of the system are as follows.

This product is a femtocell access point for indoor use that supports VoLTE services. Simply connecting it to a broadband circuit is enough to immediately enable VoLTE services to be used with a VoLTE-compatible device. The energy efficient base station features a compact, sleek design for equipping offices and homes.

The femtocell gateway coordinates the operations of tens of thousands of BroadOneLS100 Series access point, and efficiently maintains stable connections between core networks.

Fujitsu built the femtocell system and is providing operations and maintenance services, thereby contributing to high-quality and stable network services.