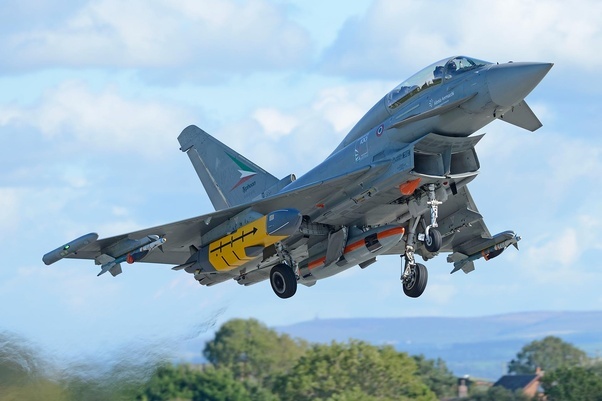 This continues the series of trials that Eurofighter Partner Company, Alenia Aermacchi, is leading to demonstrate the full integration of the Storm Shadow missile with Typhoon’s weapon system.
With support from Eurofighter Partner Company BAE Systems, missile designer and producer MBDA, and specialist trials support from QinetiQ, the trials were conducted in November 2015 at Aberporth MoD firing range, in the UK.
The integration of the missile with the aircraft’s weapon system was successfully demonstrated. The trials also verified the interface of the missile with the weapon system for pre-launch checks, demonstrated post-launch safe separation and the subsequent commencement of missile flight.
Test pilot Enrico Scarabotto flew the sorties and he said: “The Eurofighter and its weapon system performed exactly as expected. The aircraft’s performance is not significantly degraded by this heavy missile and, thanks to the aircraft’s performance and the large number of weapon stations, after the launch of the missiles the Eurofighter keeps a full spectrum of capabilities for both air-to-air and air-to-surface engagements.
“This is a great advantage that only the Eurofighter, among western fighters, can guarantee. A truly swing-role combat aircraft.”
Storm Shadow provides a significant leap in the Eurofighter Typhoon’s operational capabilities, enabling the platform to deploy multiple weapons at a very long range well clear of danger from air defences. Storm Shadow, already in service with the Italian Air Force, Royal Air Force and others, is a long range weapon system designed to neutralise high value, hardened or buried targets.
The new weapons system will add the capability to strike in day or night in all-weather conditions, well-defended infrastructure targets such as port facilities, control centres, bunkers, missile sites, airfields and bridges that would otherwise require several aircraft and missions.
This is a new addition to the Eurofighter Typhoon’s potent simultaneous multi-role/swing-role capabilities. Powered by a turbo-jet engine, with a range in excess of 250 km, the Storm Shadow missile weighs approximately 1.300 kg and is just over 5 metres long.