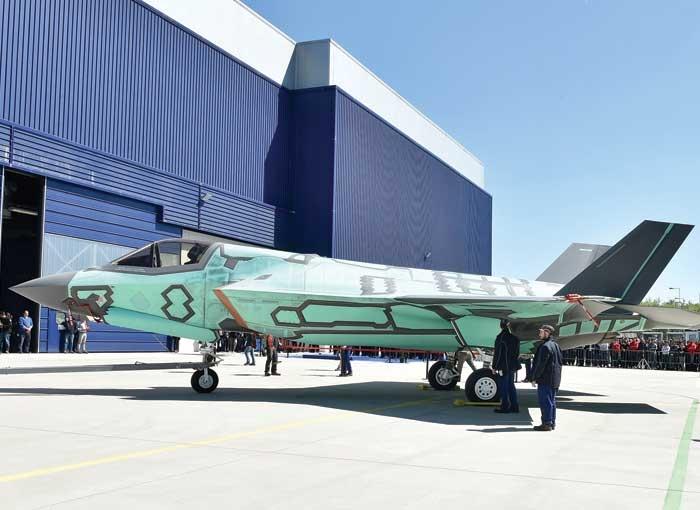 First Italian-Built F-35B ‘Rolls Out’ Of Cameri Production Facility – May 08, 2017– Cameri, Italy (Techreleased) – The first Short Take-Off/Vertical Landing version of the F-35, or F-35B, assembled outside the United States rolled out of the Final Assembly and Check Out (FACO) facility here today.

The rollout exhibits the ongoing strong partnership between the Italian Ministry of Defense, industry partner Leonardo and Lockheed Martin (NYSE: LMT). The Italian FACO is owned by the Italian Ministry of Defense and is operated by Leonardo in conjunction with Lockheed Martin with a current workforce of more than 800 skilled personnel engaged in full assembly of the Conventional Take-off/Landing F-35A and F-35B aircraft variants and F-35A wing production.

The jet’s first flight is anticipated in late August and it is programmed to be delivered to the Italian Ministry of Defense in November. In addition, two Italian F-35A aircraft will deliver from Cameri this year, the first by July and the second in the fourth quarter. To date, seven F-35As have been delivered from the Cameri FACO; four of those jets are now based at Luke Air Force Base, Arizona, for international pilot training and three are at Amendola Air Base, near Foggio on the Adriatic coast. The Aeronautica Militare (Italian Air Force) has already flown more than 100 flight hours in its Amendola-based F-35As.

After a series of confidence flights from Cameri, an Italian pilot will fly their first F-35B jet to Naval Air Station Patuxent River, Maryland, early in 2018 to conduct required Electromagnetic Environmental Effects certification. The next Italian F-35B aircraft is scheduled for delivery in November 2018. The Cameri FACO has the only F-35B production capability outside the United States and is programmed to produce a total of 30 Italian F-35Bs and 60 Italian F-35As, along with 29 F-35As for the Royal Netherlands Air Force, and retains the capacity to deliver to other European partners in the future.

The Italian FACO is also producing 835 F-35A full wing sets to support all customers in the program. The FACO was selected by the U.S. Department of Defense in 2014 as the F-35 Lightning II Heavy Airframe Maintenance, Repair, Overhaul and Upgrade facility for the European region. The 101-acre facility includes 22 buildings and more than one million square feet of covered work space, housing 11 assembly stations, and five maintenance, repair, overhaul, and upgrade bays.

On September 7, 2015, the first Italian-produced F-35 built at the Cameri FACO made the first international flight in F-35 program history, and in February 2016, the F-35A made the program’s first trans-Atlantic crossing. In December 2016, the Italian Air Force’s first F-35s arrived at the first in-country base, Amendola AB.

The F-35 Lightning II is a 5th generation fighter, combining advanced stealth with fighter speed and agility, advanced mission systems, fully fused sensor information, network-enabled operations and cutting-edge sustainment. Three distinct variants of the F-35 will replace the A-10 and F-16 for the U.S. Air Force, the F/A-18 for the U.S. Navy, the F/A-18 and AV-8B Harrier for the U.S. Marine Corps, and a variety of fighters for at least 11 other countries. The Italian F-35As and Bs replace the legacy Panavia Tornado, AMX and AV-8B aircraft. More than 200 production F-35s have been delivered fleet-wide and have flown more than 90,000 flight hours.