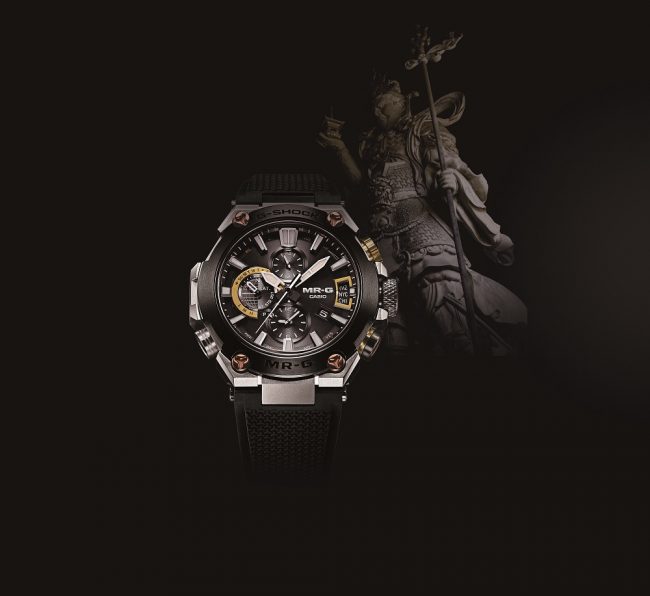 The first-ever MR-G model to feature a Dura Soft Fluoro-rubber Band, the watch combines highly durable material with soft textures for a supremely comfortable wear. Part of the brand’s flagship timepiece collection, the new MR-G model is created to be the epitome of luxury and strength with the traditional Japanese Bishamon-kiko Pattern engraved on the band.

This customary Japanese finish, which combines hexagonal shapes into groups of three, dates back to ancient times and was often seen on the armor of Bishamonten – a group of warriors that symbolized ultimate strength in battle.

Including premium features such as a diamond-like carbon coating to increase abrasion resistance, as well as titanium that’s undergone a deep layer hardening process to render it up to five times tougher than normal, the MRG-G2000R combines Japanese aesthetics with modern technology for a luxurious, tough watch.

Other top-of-the-line finishes include a scratch-resistant sapphire inner crystal coating, G-SHOCK’s legendary Multi-Band 6 technology and tough solar technology, as well as Bluetooth connectivity through the G-SHOCK Connected app(Opens the G-SHOCK Connected app website in new window)(Opens the website in new window). In another first for the brand, the Dura Soft Fluoro-Rubber Band and titanium case are connected via “L/R-Δ Loc” (pronounced “L-R Delta Lock”), which Casio co-developed in partnership with NejiLaw – a company known for “screws that never come loose.” Based on an L/R bolt* with two nuts that lock together and spin in opposite directions, L/R-Δ Loc was created specifically for watches as a revolutionary mechanism that prevents screws from coming loose due to vibration and other forces. *L/R is a registered trademark of NejiLaw Inc.