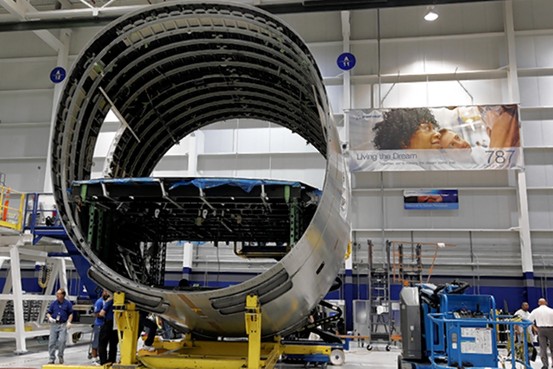 Boeing to Assemble 787-10 Dreamliner in South Carolina – Jul 31, 2014– Everett, USA (Techreleased) – Boeing announced today that final assembly of the 787-10, the newest and longest member of the 787 Dreamliner family of airplanes, will take place exclusively in North Charleston, S.C. “We looked at all our options and found the most efficient and effective solution is to build the 787-10 at Boeing South Carolina,” said Larry Loftis, vice president and general manager, 787 program, Boeing Commercial Airplanes. “This will allow us to balance 787 production across the North Charleston and Everett sites as we increase production rates. We’re happy with our growth and success in South Carolina, and the continued success at both sites gives us confidence in our plan going forward.”

The 787-10 will be 18 feet (5.5 meters) longer than the 787-9. With 10 feet (3 meters) of that increase in the midbody section, the 787-10 midbody is too long to be transported efficiently from North Charleston, where systems integration work is performed, to the Everett facility for final assembly. In addition, introducing the 787-10 in North Charleston takes advantage of that facility’s capacity while allowing the Everett facility to continue improving productivity as it focuses on the 787-8 and 787-9.

The Everett facility will continue to assemble seven airplanes per month, while Boeing South Carolina final assembly will gradually increase from three 787s per month today to five per month in 2016 and seven per month by the end of the decade.

The Boeing 787 Dreamliner family of airplanes offers airlines unmatched fuel efficiencies and environmental performance, while providing a new level of comfort for passengers through the thoughtful application of new technologies. To date, the 787 family has won more than 1,000 orders and more than 165 airplanes have been delivered to 21 customers worldwide.

The 787-10 will leverage 787 technology to provide more passenger and cargo capacity along with unparalleled seat-mile economics in the medium twin-aisle market. Since its launch in June 2013, the 787-10 has won 132 orders from six global customers.

Forward-Looking Information Is Subject to Risk and Uncertainty