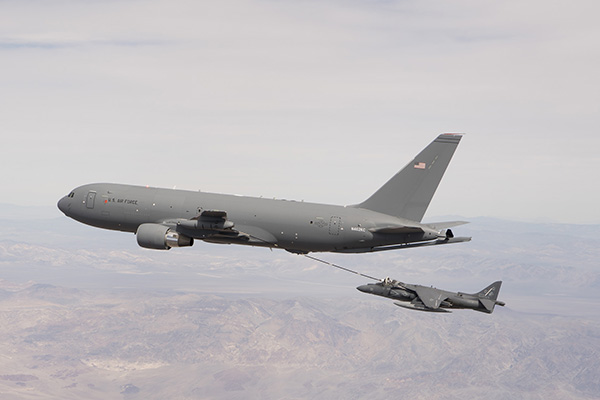 “Adding a second tanker to the flight test programme is very important as we move into the next phase of testing,” said Col. John Newberry, U.S. Air Force KC-46 System programme manager. “The team will initially use the aircraft to test mission system avionics and exterior lighting. Later, it will share the air refueling effort with the first KC-46.”

The Boeing team now will conduct a post-flight inspection and calibrate instrumentation prior to the next series of flights. As part of the overall flight test programme, the KC-46 will demonstrate it can refuel 18 different aircraft. The second tanker will help share the test load and receiver certification.

Boeing was awarded a contract in 2011 to design and develop the U.S. Air Force’s next-generation tanker aircraft and is building four test aircraft – two are currently configured as 767-2Cs and two as KC-46A tankers.

The KC-46A is a multirole tanker Boeing is building for the U.S. Air Force that can refuel all allied and coalition military aircraft compatible with international air-to-air refueling procedures and can carry passengers, cargo and patients. Overall, Boeing plans to build 179 KC-46 aircraft for the U.S. Air Force.