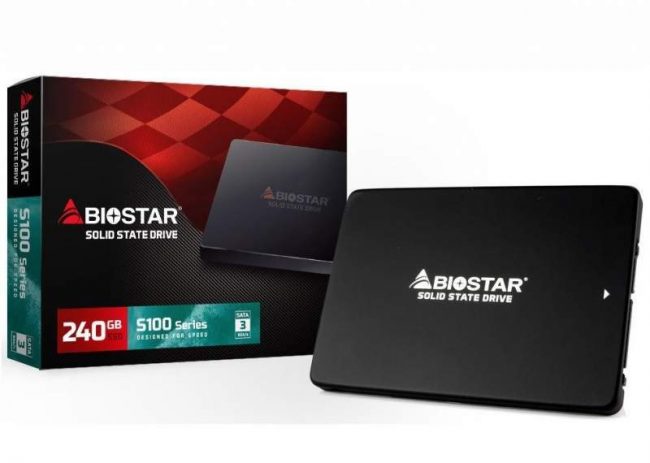 Biostar Introduces Ssd S100 Plus Series For Gamers And Content Creators’ Computer Upgrades – Jan 19, 2019 – Taipei, Taiwan (Techreleased) – BIOSTAR, a leading manufacturer of motherboards, graphics cards, and storage devices announced the debut of the S100 Plus series SSD , an affordable solid state drive (SSD) with outstanding performance for laptop and desktop computer upgrades. Built in a beautifully designed 2.5-inch unibody with ultra-slim 7.0mm casing, and the SSD S100 Plus Series is also ultra-stable under a shock-proof design. The S100 Plus Series SSD is available in 240GB and 480GB. Hence, upgrading or replacing previous generation storage is now more accessible than ever.

The S100 Plus series SSD has an ultra-slim metal unibody casing, which is only 7.0mm in thickness, allowing it to fit in even for the slimmest laptops. Yet, it is ultra-stable thanks to the patented shock proof design, which is a crucial feature for gamers or creators on-the-go. The S100 Plus Series SSD equipped with a six-layer quality PCB, making it ultra-durable in any harsh environment (up to 70˚C (158˚F)) and still can operate smoothly to meet the demands of any hardcore user.

“We are excited to make ultra-fast and ultra-durable SSDs more accessible to all gamers with the S100 Plus Series SSD,” said by Kevin Cheng, the Global Marketing Manager of BIOSTAR.” Aside from our popular RACING series motherboards and graphics cards, we now provide a wider selection of components for gamers who are looking to maximize their performance.”