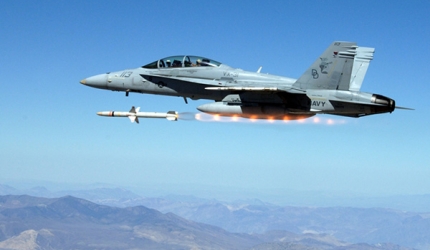 “AARGM continues to provide significant advanced capabilities to those who protect our nation each and every day,” said Bill Kasting, vice president and general manager of ATK’s Defense Electronic Systems division. “We look forward to continuing to provide this critical weapons system on schedule and on budget to the U.S. Navy and our allies.”

AARGM is currently deployed with the U.S. Navy and U.S. Marine Corps. AARGM achieved Initial Operational Capability in July 2012 and was approved by the Navy for Full Rate Production in September 2012. AARGM is a U.S. Navy and Italian Air Force international cooperative major acquisition program with the U.S. Navy as the executive agent. AARGM is currently deployed on U.S. FA-18C/D Hornet aircraft and is being integrated for use on the U.S. Navy’s EA-18G Growler and FA-18 E/F Super Hornet aircraft, as well as the Italian Air Force’s Tornado ECR aircraft. The missile is also compatible with the F-35, EA-6B, allied FA-18, and U.S. and allied F-16.