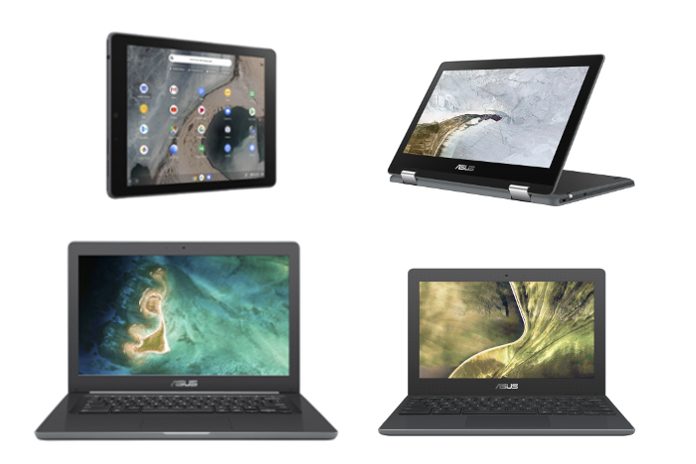 The ASUS Chromebook Tablet CT100 is designed to serve as an easy and familiar introduction to technology for much younger kids. This rugged tablet has the same version of Chrome OS that is available on the notebooks and Chromebox desktops they’ll encounter later on, but it’s fitted into a recognizable form factor that’s reinforced to withstand life in the hands of children. The rubberized chassis measures less than 10 mm thick, which means it’s easier for small hands to hang onto and less likely to take a tumble as a result. And if it does end up in freefall, it’s rated for drops up to 100cm; the height of most tables and desks.

The ASUS Chromebook C204 strikes a subtler tone, with its dark grey finish, than its predecessor, the blue-and-white ASUS Chromebook C202. In addition, the chassis is thinner making it even easier to carry around. Despite a thinner body, the ASUS Chromebook 204 is just as tough as the C202. The rubberized chassis is reinforced with thick bumpers on each corner to absorb shock, and the keyboard is tamper-resistant, preventing the keys from being pried out.

The keyboard is the primary source of input and features a deep 1.5mm of key travel, which is more than most laptops. The deeper travel allows for fewer errors than shallower keys where it’s easier to accidentally press the keys. A touch screen variant further expands the functionality of the display and allows for more interactive lessons.

The ASUS Chromebook C403 utilizes the same ruggedized design as the C204, but places it in a larger form factor. Its 14” HD display provides ample workspace for longer and more complicated projects. It has a matte coating to minimize distracting reflections from overhead lights, and a 180° hinge that allows for more freedom of motion and different work positions.