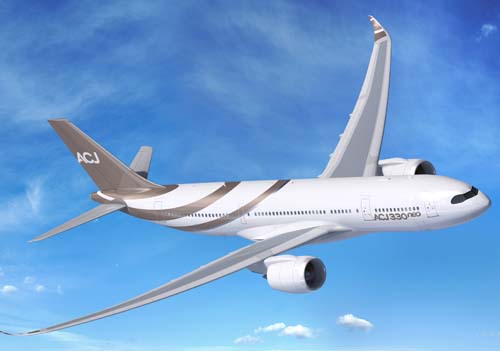 Airbus Corporate Jets Launches Acj330neo – May 22, 2017– Toulouse, France (Techreleased) –  Airbus Corporate Jets has launched a private jet version of its new A330neo[1], which combines new-generation engines and aerodynamic and other improvements to deliver even more comfort, efficiency and true “nonstop to the world” range.

“For customers, such as countries needing to fly heads of state and delegations worldwide on government business, the ACJ330neo offers an unbeatable combination of modern design, proven capability and productivity, as well as being part of the world’s best-selling widebody family,” declares Airbus Chief Operating Officer, Customers, John Leahy.

And with experience in delivering around 70 turnkey cabins over several decades, Airbus has unrivalled manufacturer know-how in this field.

The A330 is the world’s most successful widebody airliner, having evolved through intelligent innovation into an even more capable one – as well as into freighter, multi-role tanker transport, and corporate jet roles.

Other new features include the option of an onboard airport navigation system (OANS), similar to GPS in cars, and a runway overrun prevention system (ROPS), for which insurance companies offer reduced premiums.

The ACJ330 also has optional dual head-up displays (HUDs) and, in common with the rest of the family, inherits excellent reliability from its airliner roots.

Launched as a joint programme, Airbus’ A330 and A340 are the world’s best-selling widebody family, with more than 2,000 orders to their credit and over 170 customers and operators.

Airbus supports more than 500 airline and corporate jet customers with one of the largest support networks in the world, including services tailored to business jet needs.