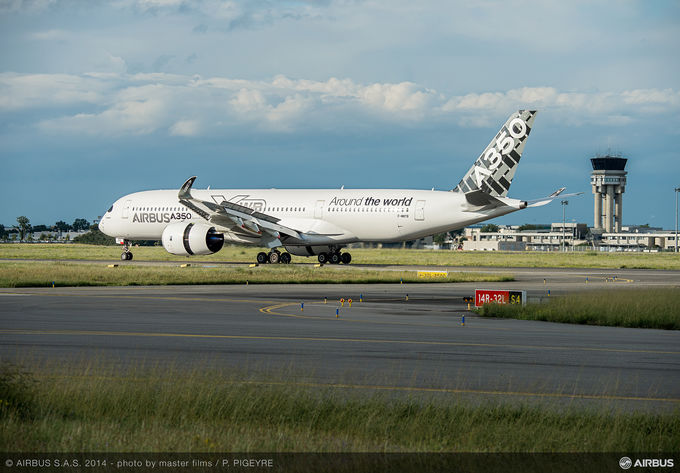 Airbus A350 XWB completes its Route Proving World Tour – Aug 15, 2014– Toulouse, France (Techreleased) – The world’s newest Widebody airliner, the Airbus A350-900, has successfully completed a series of Route Proving trials, receiving an enthusiastic welcome at each of the 14 cities it has visited over the past three weeks. At the technical Route Proving the aircraft must demonstrate its readiness for airline operations on a global scale. This last series of trials is required for Type Certification, which is expected in Q3 this year. 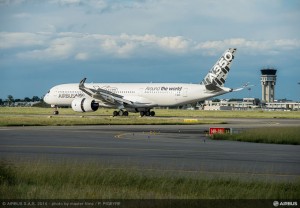 The A350 XWB completed its Route Proving after landing in Toulouse, France on August 13th (17:00 UTC) coming from Helsinki, Finland. The exercise took the flight test aircraft, MSN 005, across the globe on an impressive 20-day trip flying over the North Pole, each ocean and stopping at 14 major international airports world-wide. During its World Tour, the aircraft flew approximately 81,700 nm /151,300 km in some 180 flight hours, with all flights performing on schedule. The aircraft was operated by Airbus flight crews as well as Qatar flight crews on the route from Doha to Perth, Moscow and Helsinki. The Airworthiness Authority pilots from the European Aviation Safety Agency also participated and flew the aircraft on two legs.

A major highlight was the trip from Johannesburg Tambo International Airport, located at 5,558 feet (1,694m) above sea level, to Sydney, demonstrating the A350’s excellent performance at high altitude airports. The flights from Johannesburg to Sydney and Auckland to Santiago de Chile demonstrated also its capability to fly ultra-long-haul routes or Extended range Twin Operations (ETOPS).

“The aircraft has performed remarkably well confirming the high level of maturity that it has been demonstrating all the way during our development and certification tests. We are set for the Type Certification in the coming weeks, as planned”, said Fernando Alonso, Senior Vice President Flight & Integration Tests, and added: “I truly believe that the aircraft is fit to enter into service and perform to the expectations of our Customers.”

The technical Route Proving commenced on July 24th in Toulouse/France and comprised the following destinations: Frankfurt, Singapore and Hong-Kong. On the third trip, the aircraft visited Johannesburg, Sydney, followed by Auckland, Santiago de Chile and Sao Paulo. The fourth and final journey included Perth followed by Doha, Moscow and Helsinki.

At each destination, the A350 XWB performed as expected and on schedule. Checks were made on standard maintenance as well as typical airport operations and compatibility. The automatic landing capability of the A350 XWB was also successfully demonstrated during a local flight performed at Johannesburg.

The A350 XWB is the latest addition to the market-leading Airbus Widebody product line. Offering its customers a 25% reduction in fuel-burn, the all-new mid-size long-range A350 XWB  Family comprises three versions from 276 to 369 seats. The A350 has carbon fibre fuselage and wings and sets new standards in terms of passenger experience, operational efficiency and cost-effectiveness. At the end of June 2014, the A350 XWB had won 742 orders from 38 customers worldwide.