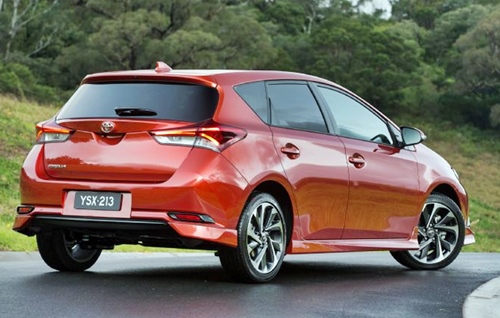 Designed to help the driver prevent or mitigate collisions in a wide range of traffic situations, this package is also available as a $7501 option on the other hatch grades, Ascent, Ascent Sport, SX and Hybrid.

The arrival of advanced safety features bring the Corolla hatch into line with its sedan sibling, which benefited from a recently introduced upgrade.

Corolla, which celebrates 50 years on the Australian market in 2017, has been Australia’s best-selling passenger car for the past four years and is the world’s best-selling nameplate.

Toyota’s pre-collision safety system2 relies on a windscreen-mounted camera and LIDAR (light detection and ranging) sensor to identify and calculate the distance to vehicles ahead.

When it detects an impact risk, it triggers audible and visual warnings and primes the brakes for extra stopping force. If the driver doesn’t take action, the system initiates autonomous emergency braking2 to reduce the vehicle’s closing speed.

Lane departure alert2 also uses the camera and LIDAR sensor to identify lane markings and trigger warnings. The system alerts the driver if the car begins to deviate from its lane without the turn signal being operated. LDA-equipped vehicles have a specific function button on the steering wheel.

Automatic high beam2 for the headlights detects when there is on-coming traffic or vehicles ahead and automatically switches between high and low beam for maximum illumination and vision in night-time driving.

Corolla hatches are offered with a petrol engine and the choice of six-speed manual gearbox or seven-speed sequential-shift continuously variable transmission (CVT), and as a petrol-electric hybrid with all-gear CVT.

Ascent and Ascent Sport grades are offered with both transmissions; SX and ZR has the automatic CVT exclusively. The manual SX grade has been discontinued.

Corolla Hybrid has maximum combined output from its two power sources of 100kW and combined-cycle economy of 4.1 litres/100km3.

The Corolla hatch range is covered by Toyota Service Advantage capped-price servicing at $140 per service4.