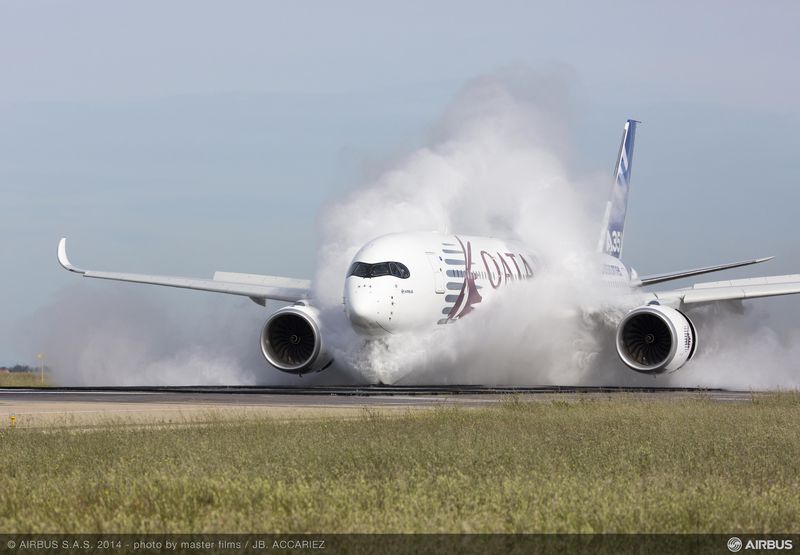 A350 XWB MSN004 successfully undertakes water ingestion tests at Istres – May 12, 2014– Istres, France (Techreleased) – Airbus has successfully performed certification testing to demonstrate the A350 XWB’s ability to operate on wet runways. During these tests at Istres, France, the flight-test aircraft, MSN004, travelled through troughs containing at least 22mm of water depth, at a variety of speeds, starting at 60kts, and successively increasing to around 140kts. This test validates how the aircraft would behave on a very rain-soaked runway, and verifies that neither the water under the aircraft nor the spray generated by the nose landing gear will enter the engines or APU. For the test, the “water trough” was created by applying to the runway’s surface grooves and rubber strips inserted in the grooves to retain the water. This pool measured 100m long by 29m wide. The aircraft performed several runs as planned in order to test various cases, including the use of reverse thrust. The results will be analysed by the Airbus Design Office, which will extrapolate them to predict a variety of typical operational scenarios.

The A350 XWB’s certification testing is progressing well, and is on track for certification in Q3 2014, to be followed by entry into service with Qatar Airways in Q4. The first four A350s now flying have together accumulated around 1,600 flight-test hours and over 350 flights. The flight-test fleet will be completed with the fifth aircraft, MSN005, in the coming weeks.