Nov 27, 2012– Lakehurst, USA  (Techreleased) – A new environmentally friendly way to clean aircraft wheel bearings and other critical components that can’t be exposed to water is expected to be complete by the end of the year. The land-based and shipboard system will save time, money and labor as it replaces the old system […]

Nov 27, 2012– Lakehurst, USA  (Techreleased) – A new environmentally friendly way to clean aircraft wheel bearings and other critical components that can’t be exposed to water is expected to be complete by the end of the year.

The land-based and shipboard system will save time, money and labor as it replaces the old system that was headed for obsolescence.

NAWCAD Lakehurst has been replacing existing solvent part washer units at designated land-based activities and in the fleet at the rate of six per month since installation began in August 2011.

This is important to NAS Lemoore and other California Naval activities because they would not have been able to perform the basic maintenance with old solvents that did not comply with air quality regulations.

The Clarus PCS-10 uses agitation in a turbulent solvent bath that doesn’t pollute.

“Excellent solvency, corrosion inhibition, low toxicity fast drying times, high flash point and minimal odor are expected benefits,” said Christopher Mahendra, project engineer. “It is simpler in terms of both supportability and training to develop a common, flexible unit for all of the Naval activities engaged in similar processes.”

The PCS-10 was designed and tested to meet shipboard shock, mechanical vibration, and electromagnetic interference requirements. It is being installed on ships and at Fleet Readiness Centers.

One challenge during testing was meeting the Volatile Organic Compound emission requirements for solvent cleaning units. At the inception of the PCS-10 project, the air quality control district in the Central Valley of California, the controlling regulatory body for the air pollution standards that Naval Air Station Lemoore must follow, had the most stringent requirements.

With the PCS-10, cleaning fluids are continuously filtered.

“Older units would result in a waste volume that would need to be disposed of, with an associated cost that could be substantial depending upon whether it was classified as hazardous or non-hazardous due to heavy metal content and the local disposal regulations,” Mahendra said.

Teams from Lakehurst’s common support equipment competency and contractors traveled to install the units and so far, response has been positive.

“From the fleet comments I have gotten back, and from my own surveys of the previous cleaning operation, as this unit is much more automated there will be substantial labor savings,” Mahendra said. “Labor savings translate into cost savings.”

When installation is complete, 91 new solvent cleaning units will have replaced 20-year old washers and dryers.

This is important because aircraft wheels accelerate from zero to 180 knots or more, in seconds. On landings, they bear the aircraft’s weight and deceleration force from touchdown to stop in just a few seconds. All the while, critical bearings make each forced motion possible.

Tolerances are such that no critical part may come in contact with water. The only liquid these critical parts ever contact is a solvent designed to penetrate heavy grease, dirt, and bits of corrosion suspended in the grease and carry them all away. In the Clarus PCS-10, only the solvent returns after being filtered from the rest. It must be sprayed again from many directions while the basket of critical items is repeatedly raised and lowered, targeting all the hard-to-reach surfaces.

The PCS-10 brings immediate changes aboard ship. Sailors aboard ship no longer carry cleaned parts to another unit across a maintenance room to dry them. Instead, they clean the parts and remove them dry from the new self-contained unit for evaluation, repacking (with grease) and re-use.

“The installations we do aboard ships take two to three weeks,” said Dan Burton, corrosion control installation lead at NAWCAD Lakehurst. “Initially, there is hesitation as we represent change but by the time we complete the installations and operator training , they love us and the solvent parts washer.” The new system moves them from a manual, 20-year old units, requiring constant re-setting to completely automated ones that even clean faster.

“In a year and a half we have had no complaints about the washer or our training,” Burton said. “By the time we leave the ship, all sailors that would need to use the unit are fully capable of operating the parts washer.”

When Burton leaves the ships he knows the team has made Sailors’ lives better, more productive and safer.

And there is an added benefit.

“In addition to aircraft wheel bearings, anything small enough to fit into the load basket and below the weight limit that cannot be exposed to water can be cleaned in this unit,” Mahendra said. 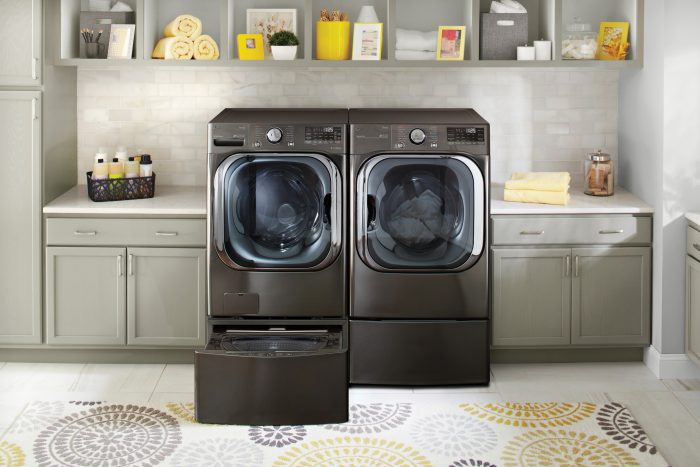