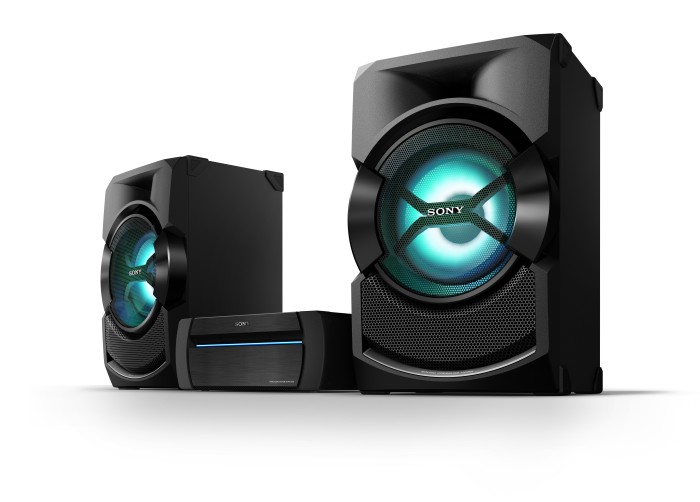 The MHC-V7D delivers soul shaking bass, with 1550W of sound pressure (RMS 1440W, 105.5dB SPL) thanks to Sony’s new Smart High Power Technology,designed to increase acoustic pressure. Featuring Sony’s Clear Audio+™ technology to optimise sound settings with one single touch as well as a Football mode that enhances the atmosphere of sporting events, the MHC-V7D provides ideal, occasion specific sound, whether you are having a chilled night in, are watching the game, or hosting a party.

Enhance your favourite tracks with easily controllable DJ- and Sampler sound effects, such as audience reactions and reggae horns or add your own voice to your favourite songs with two Microphone inputs for Karaoke. The bass bumping MHC-V7D also allows you to elevate the atmosphere on your dance floor further by engaging your visual senses with integrated, adjustable space illuminating party lights that let you synchronise the light effects with the beat of the music.

MHC-V7D’s new Gesture Control Technology lets you effortlessly transcend the world of DJs as you control both, the music and lighting at your party effortlessly with the flick of your hand.

Connect your smartphone to the speaker system via NFC™ and Bluetooth® to wirelessly stream and listen to your playlists on the MHC-V7D. Keep in full control of the music and lights, add DJ-Effects and enjoy voice playback even while mingling with your friends using Sony’s new Fiestable app. Simply download the App from the Google Play™ or App Storeand connect the MHC-V7D to your smart device, which will act as a remote control.

This true DJ-experience is packed into a space saving one-box design. Should you however feel the need to truly wake up the neighbours you can use Party Chain Mode to hook-up and sync the MHC-V7D to other compatible High Powered Audio Systems such as the SHAKE-X3D or SHAKE-X1D.

Whether you are hosting a celebration or just want to enjoy your favourite tracks during a lazy weekend, Sony’s new SHAKE-X3D two-way speaker system features a 2.5cm (1”) tweeter for clear high notes, while a 25cm (9.8”) woofer delivers bone shattering bass. Experience 2300W of sound pressure (RMS 1200W, 114.0db SPL) thanks to the new Smart High Power Technology, bringing breath-taking atmosphere to your living room. Sony’s sound pressure horn enhances bass strength and depth by increasing its acoustic pressure whilst DSEE™ (Digital Sound Enhancement Engine) elevates your music by restoring high-frequency signals often lost in compressed audio sources. Make the SHAKE-X3D your perfect speaker system in every situation. Thanks to the featured Party Chain Mode you can even combine multiple compatible Hi-Fi systems to the SHAKE-X3D to create an even more powerful sound.

SHAKE-X3D lets you become the star of the party as you can add DJ-typical sound effects at the press of a buttonto your favourite party-anthems while integrated Speaker Lights bring the real club feeling to your living room. Thanks to NFC™ and Bluetooth® you can also stream, enjoy music content from your smart device on the speakers and control the speaker system via the Fiestable App that can be downloaded from the Google Play or App Store.

Much like its big brother, the SHAKE-X1D incorporates all of the Shake-X3D’s features in a more compact design with 1850W of sound pressure.