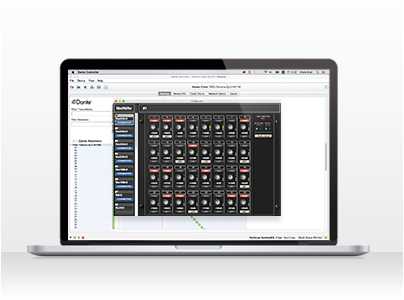 The V2.0 GUI has been revised to allow numeric entry of gain values as well as generally smoother, more efficient operation. The number of R series units that can be controlled has been increased from 8 to 24, support has been provided for R series units set to a fixed IP address or DHCP configuration, and a number of other changes improve utility in complex, large-scale systems. Version 2.0 supports Mac as well as Windows platforms, for even broader versatility and convenience.

Some common uses for the R Remote application include live recording with only an R series I/O rack and a computer running Nuendo Live or a similar DAW, connecting an R series I/O rack to a console such as the 02R96VCM or 01V96i that does not support remote HA control (a Dante-MY16-AUD card must be installed in the console), operating Dante network installation infrastructure independently from a console, and more. R Remote V2.0 adds new control convenience to the superior portability and expandability provided by such systems.

R Remote V2.0 can be downloaded from the Yamaha Pro Audio website.

Yamaha PA department manager Ken Hiraoka comments: “R Remote has been adopted by a large number of users since its release, and we are pleased to be able to offer an updated version. The update includes new features that specifically respond to the most numerous requests received from the field: Mac compatibility, numeric entry of gain values, and more. We believe that R Remote V2.0 will satisfy the needs of an even broader spectrum of users.”